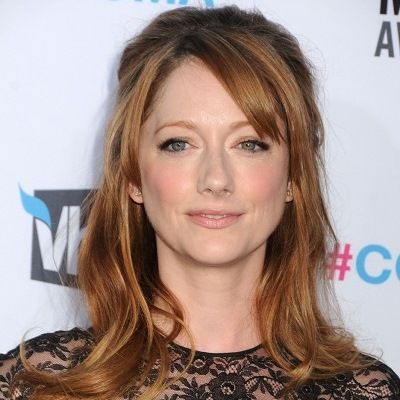 I really love this character I played called Becky Freeley in a TV show called Miss Guided (2008). We only shot seven episodes and nobody watched it and it was on for like a second but I really liked that character.

I'd been dating my husband for about a year and I'd already kissed George Clooney, Ashton Kutcher, and Gerard Butler. Awesome year, right?

Judy Greer and Dean Johnsen (executive producer of Real Time with Bill Maher) met each other on a blind date in 2010. The couple got engaged on June 21, 2011, and married after six months, on December 17, 2011, at the Los Angeles Athletic Club.

Who is Judy Greer?

Judy Greer is an American actress and author, who is best known for portraying Kitty Sanchez in the Fox sitcom ‘Arrested Development’. Likely, she first rose to prominence in the early 2000s, appearing in the romantic comedies What Women Want (2000), 13 Going on 30 (2004), and 27 Dresses (2007). She made her directorial debut with A Happening of Monumental Proportions (2017).

Judy Greer was born in Detroit, Michigan, the United States on July 20, 1975. Her birth name is Judith Therese Evans and she is currently 44 years old. Her father’s name is  Rich Evans (mechanical engineer) and her mother’s name is Mollie Ann Evans (hospital administrator).

There is no information about her siblings. Judy holds American citizenship and mixed (German- Irish- English- Welsh- Scottish) ethnicity. Her birth sign is Cancer.

Talking about Judy’s education history, she attended Churchill High School and trained in classical Russian ballet for about a decade during her early years. She enrolled in Chicago’s prestigious Theater School at DePaul University, from where she graduated in 1997.

Talking about her profession, she made her TV debut on the episode ‘Angels and Devils’ of the fantasy-drama ‘Early Edition’ in 1997 and landed a recurring role in the CBS sitcom ‘Love & Money’ in 1999. During this time, she had supporting roles in a host of films including ‘Three Kings’, ‘The Specials’, ‘What Women Want’, ‘The Wedding Planner’ and ‘Adaptation’ In the year 2002, she appeared alongside Stephen Colbert in an untitled Ken Finkleman project based on his Canadian show ‘The Newsroom’, but it was later canceled.

On television, she voice-acted on the animation show ‘Family Guy’; guest appeared on ‘Just Shoot Me!’, ‘CSI: Miami’, and ‘My Name Is Earl’, and had a major role in the short-lived series ‘Love Monkey’. Whereas, her film credits during this time included ‘Love Happens’, ‘Love & Other Drugs’, ‘The Descendants’ and ‘Jeff, Who Lives at Home’.

During 2011, she was one of the main casts alongside Jason Biggs, Sarah Chalke, and Tyler Labine in the CBS series ‘Mad Love’, which aired as a mid-season replacement but was canceled after the first season. She also co-starred in the films ‘Tomorrowland’, ‘Jurassic World’ and ‘Ant-Man’ in 2015.

Judy Greer has an estimated net worth of around $5 million and she has earned that sum of money from her professional career.

There was a rumor about Judy Greer’s pregnancy. Currently, she is far from rumors and controversies.

Judy Greer has a height of 5 feet 10 inches and she weighs is 61Kg. Additionally, she has a measurement of 34-25-34 inches. Judy’s hair color is light brown, she dyed her hair red in the past for the 2009 movie “Love Happens.”She has also dyed her hair blonde and her eyes color is blue. Furthermore, her dress size is 4 (US) and her shoe size is 9 (US).