Judy Woodruff is a journalist, anchor. Judy is married to Al Hunt and a mother of three. 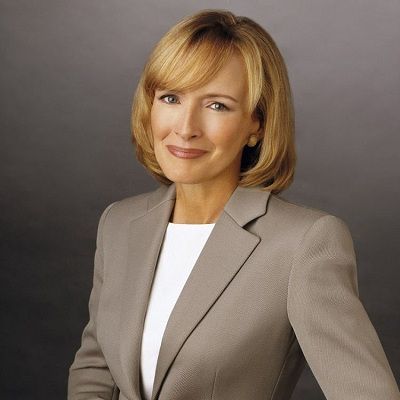 Every news organization should ideally be as broadly representative as possible

It's always unfortunate when a reporter is sent behind bars for failing to turn over sources. There's no way to say what the long-term outcome will be.

Woodruff is married to Al Hunt who is a columnist and former reporter. They are living in Washington, D.C.  The couple met during a softball game between journalists and staff of the Carter presidential campaign in Plains, Georgia in 1976. They married on April 5, 1980, in St. Alban’s Episcopal Church in Washington, D.C.

The couple has three children, Jeffrey (1981), Benjamin (1986), and Lauren (1989). About five hours after appearing on-air Woodruff gave birth to Jeffrey. After surgery in 1998,  Jeffrey was born with a mild case of spina bifida and became disabled and brain-damaged, which caused Woodruff to reduce her workload at CNN. When Lauren was four months old, she was adopted from Korea.

Who is Judy Woodruff?

Judy Carline Woodruff is an American broadcast journalist. She has worked in network, cable, and public television news since 1976. Judy is currently an anchor and managing editor of the PBS NewsHour.

Moreover, she also serves as a member of the advisory board for the non-profit organization America Abroad Media.

Judy Woodruff’s age is 72 years old. She was born on November 20, 1946, in Tulsa, Oklahoma, the U.S. Talking about her family, her parents are William Henry Woodruff and Anna Lee Woodruff. She has one sibling, a sister named Anita.

She belongs to American nationality and Caucasian ethnicity.

About her education, Judy Woodruff attended Meredith College in Raleigh, North Carolina, starting in 1964 and initially pursuing a degree in mathematics.  In 1966, she transferred to Duke University after two years at Meredith. Woodruff decided to enter journalism in her senior year and then, she graduated from Duke with a bachelor’s degree in political science in 1968.

She started her career in 1968 when she was hired as a secretary at the news department of the ABC affiliate in Atlanta, Georgia (WQXI-TV), and began working after she graduated. In 1970, she left the affiliate after a year and a half to move to the local CBS affiliate WAGA-TV, working as a reporter.

She moved to NBC, where she served as a general-assignment reporter based in Atlanta in 1975. When Carter was not yet seen as a major contender, she was assigned to cover Jimmy Carter’s successful 1976 presidential campaign for NBC. Until she was taken off the campaign trail halfway through 1976, she traveled with Carter’s presidential campaign.

Afterward, she was Chief Washington correspondent for The Today Show on NBC for a year. In mid-1983, Woodruff moved to PBS and becoming the chief Washington correspondent for The MacNeil/Lehrer NewsHour. Woodruff spends more time with her family and left Frontline in 1990. She covered all presidential conventions and campaigns and moderated the 1988 vice-presidential debate between United States Senators Dan Quayle (R-IN) and Lloyd Bentsen (D-TX) in PBS. In 1993, Woodruff left the NewsHour to move to CNN.

At the end of 1992, She was first asked to work for CNN by Tom Johnson and took the job four months later after some initial hesitation. Woodruff started anchoring the political talk show Inside Politics, and the international news program The World Today together with Frank Sesno in June 1993.

Judy and Shaw become the host When the daily world affairs program CNN WorldView was launched in 1995. She continued being co-anchor of WorldView until it went off the air in 2001. Shaw retired, which caused Woodruff to become the sole host of Inside Politics, which was subsequently renamed Judy Woodruff’s Inside Politics in February 2001.

In June 2005, She left CNN after her contract expired in order to teach, write, and work on a long-form television project. Furthermore, In the fall of 2006, she taught a course at the Sanford School of Public Policy at Duke University on media and politics. Additionally, Woodruff started hosting Conversations with Judy Woodruff, in which she interviewed people.

Until 2013, she continued presenting Conversations with Judy Woodruff. In February 2007, she became a senior correspondent a few months later. Moreover, The news program moved to a dual anchor format and changed its name to PBS NewsHour in December 2009. In September 2013, Woodruff became co-anchor of the PBS NewsHour, presenting the program with Gwen Ifill on weekdays and alone on Fridays.

Woodruff and Ifill moderated the sixth Democratic presidential debate in February 2016. In March 2018,  formalized Woodruff’s position as “solo anchor” but PBS initially sought a replacement for Ifill. Previously, she was a member of the Knight Commission. Currently, she serves as a member of the Council on Foreign Relations and the American Academy of Arts and Sciences.

Judy has written the book This Is Judy Woodruff at the White House, in which she has described her experiences working as a journalist.

In 2017, she won Medal for Lifetime Achievement in Journalism from Poynter Institute. Similarly, she also won the Radcliffe medal from Radcliffe Institute for Advanced Study. Furthermore, the same year she won the Gwen Ifill Press Freedom Award.

Judy Woodruff has an estimated net worth of $8 million and her salary is $3 million. Woodruff is planning to spend her amount on social activities related to children. Her primary source of income is journalism.

There were rumors that Betsy Woodruff is the daughter of Judy Woodruff and American columnist Al Hunt. But, Betsy cleared the rumor by confirming on 14th November 2017, that Judy isn’t her mother through her tweet.

She has not been involved in any controversies.

Judy has an amazing height and maintained perfect body weight. She stands at a height of 5 feet 2 inches tall and has a weight of 56 kg. Judy has blonde hair and green eye color. She has a slim body built with measurements of 34-25-35 inches.

Coronation Street star Alison King is engaged to her mystery boyfriend! Know about her previous relationships!