She was the news anchor for ABC News ‘Good Morning America.’ 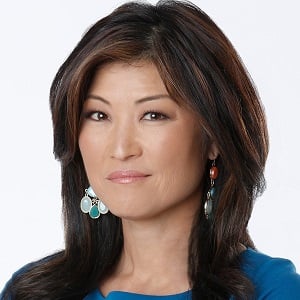 Juju Chang is a married woman. She is married to the president of WNET Neal Shapiro. The pair married on December 2, 1995.

They have three sons together: Jared, Travis, and Mason. The marriage is going strong as there is no news regarding any extramarital affairs at present.

Who is Juju Chang?

Juju Chang is an American television journalist for ABC News. Currently, she serves as an anchor of ‘Nightline.’ Previously, she was the news anchor for ABC News ‘Good Morning America.’

Chang was born in Seoul, South Korea as Hyunju “Juju” Chang on September 17, 1965. She was born to her parents Okyong Chang and Chang Pal-gi. Throughout her childhood years, she grew up in Sunnyvale, California.

Chang is of American and South Korean nationality. Furthermore, she belongs to a mixed ethnic background of Korean.

Talking about her education, she attended Marian A. Peterson High School for a year. Additionally, she also attended Adrian C. Wilcox High School and graduated in 1983.

Furthermore, she graduated from Stanford University with a Bachelor of Arts in political science and communications.

Juju Chang initially began her career at ABC in 1984. Later, she became a producer and off-air reporter for ‘World News Tonight.’ She reported important events like the 1991 Gulf War and the 1992 U.S. presidential election. After working for a year in KGO-TV, Juju returned to ABC News in 1996.

In addition, she has also covered other events like the anniversary of the Chernobyl nuclear disaster, Hurricane George, and the bombings of U.S. embassies in Kenya and Tanzania among others.

Chang has also contributed reports to ABC’s news magazine ‘20/20.’ On December 14, 2009, she joined ‘Good Morning America.’ She interviewed United Nations Secretary-General Ban Ki-moon in September 2011. She also served as the host of a seven-part television series called ‘The Art of Women’s Health.’

Chang has won the DuPont Award, two Gracie Awards, and three Emmy awards among others. Additionally, she has also received a Freddie award.

Chang has not revealed her current salary. Furthermore, there are no details available about her estimated net worth.

Talking about her body measurement, Juju Chang has a height of 5 feet 4 inches and a decent weight. Additionally, her hair color is dark brown and her eye color is black.