Julia Baird is a political journalist, commentator from Austrailia. She is married and a mother of two. 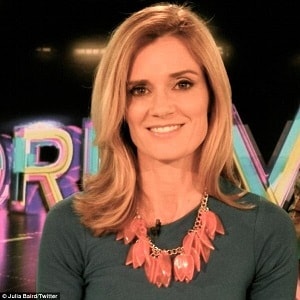 Julia Baird is a married woman. She has two children but has not shared information regarding her children’s names and her husband’s names. Hope, she is currently living with them and they are sharing quality time with each other. She is currently residing in Sydney, Australia.

Who is Julia Baird?

Julia Baird is an Australian political journalist, writer, and television commentator who is currently working as a biography writer for Queen Victoria for Random House.

While her father was working as an Australian Trade Commissioner in the 1970s, the family lived in Rye, New York.

Julia holds Australian citizenship but her ethnicity is Caucasian.

She attended Ravenswood School for Girls and then achieved a Ph.D. in history from the University of Sydney in 2001. She wrote a thesis on women in politics. Also, she was a fellow at the Kennedy School of Government at Harvard University researching the globalization of American opinion in the lead-up to the Iraq War in 2005.

She began her career as a journalist in The Sydney Morning Herald in 1998. She served as an editor, education reporter, columnist, and election editor. In addition, she managed in Triple J as a religious commentator and ABC Radio as a freelancer.

She wrote a book titled ‘Media Tarts: How the Australian Press Frames Female Politicians’ which was published in 2004.

Furthermore, she became the deputy editor at Newsweek in New York City in 2006 and worked there till 2012. Her other publications include ‘The Philadelphia Inquirer’ and ‘The New York Times.

Recently, Julia Baird has written about Donald Trump’s political strategy, and also she has covered religious topics in her writing. She has signed a contract with Randon House in 2010 in order to write a biography of Queen Victoria. Also, she is currently hosting ‘The Drum’ a current affairs television show in Australia.

She revealed in 2015 that she has been recovered from surgery for cancer and also, her brother revealed during a press conference on January 19, 2017, that her cancer has recurred.

She won an honorary Doctor of Divinity degree on 16 March 2018 from the University of Divinity.

She must have earned a huge sum of money from her professional career she has a net worth of $1 Million USD however, she has not revealed his exact salary and income.

Julia Baird has a slim body and she has black eyes and brown hair. Also, her body measurement is 33-26-32 inches and her bra size is 33B. But, information regarding height, weight, shoe size, dress size, etc. is not available.