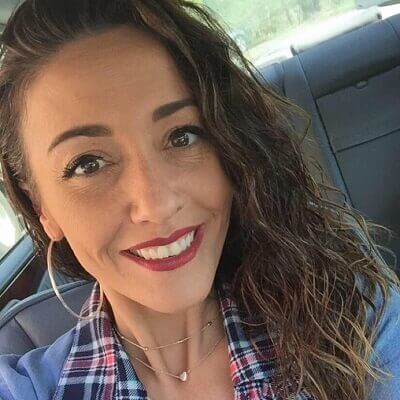 Julia DeMato is currently in a relationship. She is in a relationship with a man named Gregory Mead. Julia first uploaded a picture with him in 2018. Since then, she has regularly posted pictures with him on her Facebook and Instagram.

Previously, she was engaged to Jim Polches. From their marriage, she had her first child, her son, James Peter Polches. James was born on July 6, 2005. However, things did not work out for the couple and they got divorced.

She also has a daughter named Sophia.

Who is Julia DeMato?

Julia DeMato is an American singer and cosmetologist. She became popular after making it into the top 10 of the second season of American Idol.

Julia DeMato was born on March 7, 1979, in Danbury, Connecticut. As of 2020, her age is 41. She was born to parents, Peter DeMato(father) and Joan DeMato(mother). Her father owns Chase Equipments in New Milford whereas her mother is a realtor in her home town at RE/MAX. She has five elder brothers. She spent her childhood days in Danbury with her parents and siblings.

Her ethnicity is Italian.

Talking about her education, she went to Brookfield High School. From there, she graduated in 1997.

Julia’s career started in 2003 when she decided to go on the audition of the second season of American Idol. In the earlier rounds, she was featured heavily. She sang ‘Son of a Preacher Man’ by Dusty Springfield in the semi-finals.

Moreover, she sang ‘Flashdance… What a Feeling’ and ‘Where Did Our Love Go’ in the finals. She also performed ‘Breathe’ by Faith Hill before being voted off the talent show on March 26, 2003.

This, however, was not the end of her journey with American Idol. On the concert tour of the show, she sang ‘Beautiful’ by Christina Aguilera and recorded a cover of ‘At Last’ on the show’s Love Songs CD.

In 2003, she featured as a judge for the Oxygen Network’s TV show, Meow TV. She recorded one song, Let It Rain with Somme Music. However, it was the only record she ever did as she was unable to secure a recording contract with an established record company.

She started working as a cosmetologist. Currently, she is a master stylist at ‘Whip Salon‘.

Arrested for Drink-and-drive and Drug Possession

In December 2005, DeMato was arrested for driving under influence and drug possession. The singer was arrested in the parking lot in a Brookfield restaurant called Pancho and Gringos.

The police officers saw her drive her SUV into the parking lot of the restaurant more than an hour after the restaurant had shut down. Seeing this, the police followed her at 2 in the morning and found out that she had been drinking and arrested her after failing sobriety tests.

Furthermore, the police also found two marijuana pipes, some marijuana, and a small amount of cocaine in her car.

You may also like to read the Bio, Body Measurements, Career, Net Worth, Relationships, and more about Chris Daughtry, Laine Hardy, Carmen Rasmusen, and more.