Julia Louis-Dreyfus is an American actress, comedian, singer, and producer. She is known for her work in the television comedy series Saturday Night Live.

Julia Louis-Dreyfus is a married woman. She is wedded to Brad Hall. Her husband is an actor known for acting in “The Single Guy,” “Watching Ellie,” “Bob Patterson,” and others.

The couple married on June 25, 1987. Since then they have been together. The lovebirds have survived many ups and downs of their marriage.

Apart from this marriage, there is no information about any other relationships or affairs. 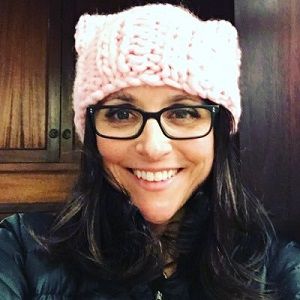 I will quote Norman Lear, who said that celebrity is something you can spend. And so I have taken my so-called celebrity and occasionally spent it down on causes or things that I'm passionate about. I'm not running for office. I'm not a scientist. But I'm a concerned citizen

Whenever I felt down, my mom would remind me that sense of humor gets you through just about anything

I love the film festival circuit. I think there's something about it, I don't know. Maybe I'm being Pollyanna-ish about this, but it's an opportunity to be very supportive of filmmakers, and there's just this goodwill which I love.

Who is Julia Louis-Dreyfus?

She has also been part of ‘The New Adventures of Old Christine’ and also the HBO TV series Veep.’

The name of her father is Gerard Louis-Dreyfus. He was the ex-chairman of Gerard Louis Energy Services who sadly passed away in 2016. Her mother’s name is Judith LeFever.

Judith used to work as a writer and a special needs tutor. Soon after a year of her birth, her parents got divorced. Although she was born in New York, she grew up in several countries like Columbia, Vietnam, and Tunisia.

She lived in different places during her childhood. Julia has mixed ethnicity in English, French, German, Scottish, Mexican, and Scots-Irish.

For her education, she went to Holton-Arms School in Bethesda, Maryland. She graduated from there in 1979. Then she enrolled at Northwestern University in Evanston, Illinois. Later, she dropped out to pursue acting.

Julia Louis-Dreyfus is an actress, a comedienne, and a producer by profession. She started off her career via the TV show, “Saturday Night Live” in 1982. Julia Louis-Dreyfus performed several characters in 57 episodes of the shows till 1985.

Then, she made her debut feature film in a dark fantasy comedy film, “Troll” in 1986.

The same year, she also acted in “Hannah and Her Sisters” and “Soul Man” as Mary and Lisa Stimson respectively. Afterward, she appeared in TV shows, “Day by Day” in 33 episodes from 1988 to 1989.

Similarly, she also featured on TV shows like “Dinosaurs,” “The Single Guy,” “London Suite,” and others.

Additionally, she acted and produced “Watching Ellie” from 2002 to 2003. Her role as Christine Campbell in “The New Adventures of Old Christine” from 2006 to 2010 raised her fame.

Again, she also produced the show. Then, she joined the cast of the political satire television series, “Veep” in 2012 as Selina Meyer. She is also the executive producer of it.

Furthermore, she gave voice to Rochelle in the animated film, “Planes” in 2013. In 2015, she appeared in “Inside Amy Schumer” as herself. For her work in “Seinfeld,” she won five American Comedy Awards and One Golden Globe Award.

Presently, she earns a huge amount of salary. Subsequently, her estimated net worth is around $ 250 million.

Julia Louis-Dreyfus got into a controversy when she teased U.S. President’s immigration travel ban decision.

Apart from that, she gets into media tittle-tattle because of her political comments. Otherwise, she is away from any criticism or rumor.

Julia Louis-Dreyfus has a height of 5 feet 3 inches. She maintains her body. Consequently, she has a sexy figure of 34-25-35 inches.

While she has hazel eyes, her hair is of dark brown color. She weighs around 54 kg.

Julia is active on all sorts of social media platforms. Presently, she has more than 535k followers on Facebook.

Julia Louis-Dreyfus speaks about her conquer of cancer and the journey from the time of its diagnosis in 2017!