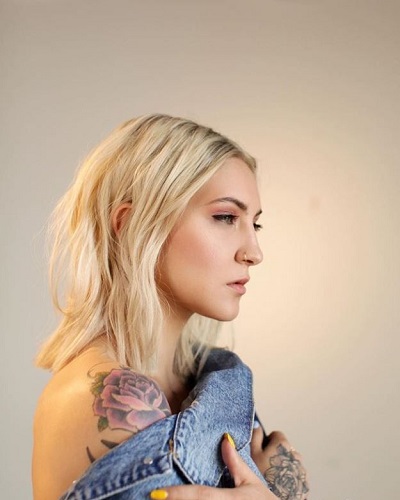 Born as Julia Carin Cavazos on November 13, 1993 (25 years at present) in Davenport, Iowa, U.S. But moved to Santa Clarita, California with her family. Her father Juan Manuel Cavazos, you might know him as John Michaels who is a Mexican/Puerto Rican.

Talking about her mother, her name is Julie Doreen. Therefore, Julia Carin Cavazos a.k.a Julia Michaels is American by nationality and Puerto Rican by ethnicity. Julia has her older sister Jaden who is also a songwriter.

She got her graduation from California State University, Northridge. Furthermore, there are no details regarding her educational background with us. Like morning shows the days, Julia began her singing since her early childhood.

At the young age of 12, she began singing and was very much fond of singing. Let’s look deeper into her musical career.

Also read: The oldest girl from “Fifth Harmony”-Ally Brooke a Mexican-American singer. Her journey from the X-Factor to a solo artist!

At the age of 14, Julia met Joleen Belle (songwriter) with whom she wrote the theme song to Austin & Ally and many other songs for TV and film. Julia has been hugely inspired by Lisa Mitchell, Laura Marling, Fiona Apple, Sarah Blasko, Missy Higgins, etc.

With Lindy Robbins (American songwriter) whom Julia met during her age of 19. They wrote songs like “Fire Starter” for Demi Lovato and “Miss Movin’ On” for Fifth Harmony. Since she was 16, she has been writing in the Hollywood Pop Circuits.

Julia writes amazing hits for world-famous artists like Justin Bieber, Selena Gomez, Fifth Harmony, etc. She met Justin Tranter who is an American musician, songwriter, and activist with whom she has done a number of collaborations.

Julia released her debut solo single titled “Issues,” in 2017 which was a hit. It was able to hit on charts around the world, also peaked multi-platinum in the U.S., Australia, and Norway. This single also appeared on her debut EP, Nervous System. Sharing about this single, she said:

“It was the first time I’d written a song that sounded so much like myself that I couldn’t picture anyone else singing it.”

This EP landed in the summer of 2017 on Republic. It brought her fame and popularity all around the world. For the HBO series Girls, she came up with another song “How Do We Get Back to Love” in April 2017. Her second single from the EP “Uh Huh” was released on June 2, 2017.

Michaels earned two Grammy nominations for Best New Artist and Song of the Year for “Issues” in the year 2018. She co-wrote and sang Clean Bandit’s hit single “I Miss You,” which was also a hit in late 2017.

She made another collaboration with American rapper Trippie Redd on her single “Jump.” On January 24, 2019, Michaels came up with her another EP, Inner Monologue Part 1 with tracks “Anxiety” and “What a Time”.

Also read: English singer-songwriter and guitarist-James Michael Bay with a successful music career. Also a supporter for the international non-profit!

Julia Michaels’s personal life yet to be revealed

Talking about Julia’s personal life, at the present time she is single and seems to be busy focusing and brightening her professional life as a successful singer and songwriter.

At last, she dated a music producer, whose name has not been revealed. But her songs talk about her past relationship. Her personal life is yet to be revealed.

A short bio on Julia Michaels:

Honest and vulnerable singer, performer, and songwriter, Julia Michaels has co-written songs for renowned singers like Justin Bieber, Shawn Mendes, Selena Gomez, Nicole Scherzinger, and many more. Her major credits include ‘Now You See Me’, ‘Blended’ and ‘The DUFF’. more bio…

As a child Aspired becoming a singer/songwriter- Lashana Lynch ended up building a passion as an English actress!
Tags : Issues Singer Songwriter