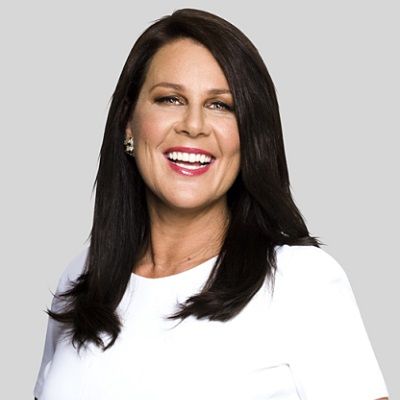 Julia Morris is a married woman. She has been married to Dan Thomas since December 31, 2005, in a private marriage ceremony in Las Vegas. Dan is a British comedian and the couple has welcomed two children: Ruby Charlotte Thomas and Sophie Rebecca Thomas. The family is currently living in Sydney.

Who is Julia Morris?

Julia Morris is an Australian comedian, actress, television presenter, writer, and producer who is famous as the host of Australia’s Got Talent, and I’m a Celebrity… Get Me Out of Here.

She was born on April 20, 1968, in Sydney, New South Wales. Her birth name is Julia Carolyn Margaret Morris and she is currently 51 years old. She has not disclosed any information regarding her parents, siblings, and childhood.

Julia holds Australian citizenship but her ethnicity is unknown.

She made her television debut at the age of 17 in 1985. Also, she was featured on television as a contestant on the talent shows New Faces. In 1995, she got featured in an Australian sketch comedy series ‘Full Frontal’.

She made her regular appearances on ‘The Middle Show’, ‘Good Morning Australia’, Beauty and the beast’, and in the action series ‘Gladiators’. She moved to the UK in 2000 and appeared on the Tv quiz ‘QI’.

In 2007, Julia Morris returned to Australia and made her appearances on ‘Thank God You’re Here, ‘Good News Week’, ‘The Singing Office’, and many more. She appeared as Gemma Crabb in the drama series ‘House Husbands’ in 2012 and the show commenced a second season on  April 8, 2013. Also, she hosted the Australian version of ‘I’m a Celebrity… Get Me Out of Here!’ on February 1, 2015.

She has an estimated net worth of around $900 k and she has earned that sum of money from her professional career. Her details regarding house, cars, and other earnings are not disclosed publically.

Julia Morris has a height of 5 ft. 10 inches and weighs 63 kg. She has brown eyes and brown hair. But, other information regarding her body measurement, shoe size, dress size, etc. is not available.

Julia Morris-her life and the beautiful rental house in Sydney!

I’m a Celebrity show filming begins next week! An excited Julia Morris talks about it!