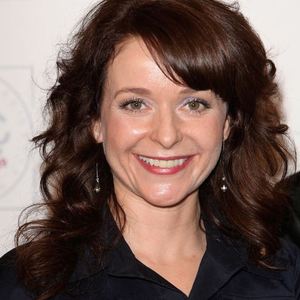 I'm on a constant path of self-discovery and change. I'm trying to become a better person, a nicer person. I love therapy - it's brilliant

Ever since I can remember feeling love for my parents, I've been frightened of losing them.

What is the relationship of Julia Sawalha?

Previously, she was dating Keith Allen and also later with comedian Richard Herring. She was also rumored of having married with Alan Davies. However, both of them denied this news.

She was also linked with Rich Annetts in 2005.

Who is Julia Sawalha?

Julia Sawalha is an English actress. Similarly, she is well known for her role as Saffron Monsoon in the BBC sitcom Absolutely Fabulous.

Likewise, she is also known for portraying Lynda Day, editor of the Junior Gazette, in Press Gang and Lydia Bennet in the 1995 television miniseries of Jane Austen’s Pride and Prejudice.

Julia was born in  Lambeth, London, England on September 9, 1968, to parents Roberta Lane and  Nadim Sawalha. He has two siblings namely, Nadia Sawalha and Dina Sawalha.

Talking about her profession, Julia Sawalha made her debut in the 1982 BBC miniseries Fame Is the Spur. During 1988, she also played a small role in Inspector Morse on the episode “Last Seen Wearing”. During 1992 she also starred in episode “Parade” (S2 E4) of Bottom as Veronica Head, a beautiful young barmaid at the Lamb and Flag.

Similarly, she also starred in the ITV family comedy Second Thoughts and continued with her character, Hannah (Lynda Bellingham’s daughter), in the British Comedy Award-winning Faith in the Future (1995–98).  During 1994, she also played Mercy (Merry) Pecksniff in the BBC production of Martin Chuzzlewit.

From 1992 to 2012, she also played strait-laced daughter Saffron Monsoon in the BBC sitcom Absolutely Fabulous alongside Jennifer Saunders and Joanna Lumley. Similarly, she also appeared in the 1995 BBC adaptation of Jane Austen’s Pride and Prejudice as Lydia Bennet, with Jennifer Ehle and Colin Firth.

During 2000 she also appeared as Janet, the Australian barmaid. Moreover, she also played the much put-upon PA to “Zak” in Argos TV adverts from 2002–2004, along with Richard E. Grant. Similarly, she has also joined actor Ioan Gruffudd in the internationally successful TV adaptations.

During 2006, she also participated in the third series of the genealogy documentary series Who Do You Think You Are. Similarly, she also appeared in the pilot of BBC 1’s A Taste of my Life presented by Nigel Slater. During 2014, she also played the part of Jan Ward in BBC One’s thriller miniseries Remember Me, featuring Michael Palin.

Talking about the lifetime achievements and awards, she won the RTS Television Award for Best Actor – Female for Press Gang (1989).

There is no information regarding her salary. Her net worth is $10 million as of 2022.

There isn’t any information regarding her personal and professional life.

Talking about her body measurements, Julia Sawalha has a height of 5 feet 3 inches. Additionally, she weighs is 56Kg. Similarly, she has a measurement of 34-27-33 inches respectively.

Julia’s hair color is light brown and her eye color is dark brown. Similarly, her shoe size is 8 (US)