Actor Julia Stiles is a mother of one. 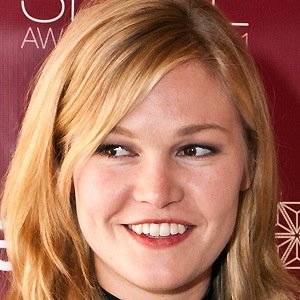 I actually have this fantasy of giving up my cell phone

I'm going to Columbia University but I'm trying to keep that low-profile because I don't want weird people following me there. I want the experience of normal college life

When I was a child, I would draw these little stick-figures, and my mom would put them up all over the loft and tell me how wonderful they were. Then you get out there into the harsh reality of the world, and you realize not everybody loves every little thing you do the way your mom did.

Reflecting on the personal life of Julia Stiles, she is married to Preston J. Cook. The couple married in the last stage of her pregnancy on 3rd September 2017.

She started dating her husband in Nov 2014 and after 1 year they were engaged on 3rd Jan 2016. They have a son Strummer Newcomb Cook born in 2017. The couple is expecting their second child in 2022.

Then she was in a relationship with David Harbour in 2011 and they split up in 2015. There isn’t any solid proof that leads towards her children. Being a celebrity, her fans are always curious to know more about her.

Who is Julia Stiles?

He is active in the entertainment field since 1993. She is best known for her appearance in Rivera, Blue, Dexter, Silver Linings Playbook, State and Main, and Wicked.

She was born on 28 March 1981 and named Julia O’Hara Stiles. Her father is a businessman and her mother worked as a potter.

She was born as the eldest of three children and has a brother Johnny and a sister Jane. She has an American nationality and has a mixed ethnicity of Irish, English, German and Italian.

Stiles studied at New York’s Professional Children’s School and attended Columbia University where she graduated with a degree in English in 2005.

At the age of 11, she took an acting class and has performed for the LaMaMa Theatre Company of New York for the first time.

Talking about the career journey of Julia Stiles, she is active in the entertainment field since 1993 and she is still active in it. In 1993, she appeared as Erica Dansby in the television series Ghostwriter. Then she appeared in the 1996 film “I Love You, I Love You Not” where she had a small non-speaking role.

She made her presentation as a main on-screen character in 1998 in the film Wicked. The film opened at the Sundance Film Festival and she was praised by the critics.

In 2010, she earned a John Jay Award. She is presumably best known for her parts in 10 Things I Hate About You in 1999 and The Business of Strangers in 2001. Her acting began with a New York-based theater group and soon, she showed up on ads.

Her execution as the supporting character in the Bourne series and the Mona Lisa Smile has been generally valued by the crowd and commentators.

She has been praised for Save the Dance also. In the fifth period of Dexter, Julia showed up as a guest for which she was assigned to the Golden Globe and the Emmy Awards.

She has been praised for Save the Dance also. In the fifth period of Dexter, Julia showed up as a guest for which she was assigned to the Golden Globe and the Emmy Awards.

She has spread her wings equally at ease in both forms of media. She has been nominated for various awards and has won Karlovy Vary International Film Festival Award, Chicago Film Critics Association Award, MTV Movie Award, Teen Choice Award, and much more. She is a supporter of Habitat for Humanity and has also worked with Amnesty International.

Her success in her career path has paid her well financially making her net worth estimated to be $16 million.

She was rumored to be transgender.

Julia Stiles is Rocking her Pregnancy in Classy way with Fiance Preston J. Cook! Check out her 5 fad maternity looks!!