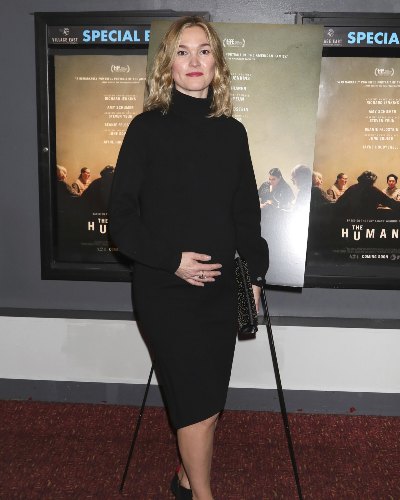 Julia Stiles is going to be a mother again! She announced her second pregnancy with her husband Preston J. Cook as she debuted her baby bump at a screening of The Humans in New York City. She wore a black bodycon turtleneck dress while cradling her growing belly.

Stiles and her husband Cook are already parents to their four-year-old son Strummer Newcomb Cook which they welcomed on 20th October 2018 at New York’s Mount Sinai Hospital. Julia has kept the life of her son Strummer private and away from social media. Previously, she was criticized on how she held her newborn son to which she clapped back writing,

“It was brought to my attention that in the previous photo I am not holding my baby correctly. Wow, I didn’t expect that. What was supposed to be a shout out of products I like, suddenly becomes an invitation to comment on my baby, and my ability as a mother.”

She and Preston married each other during the last stage of her pregnancy on 3rd September 2017. They were engaged for almost 20 months before making it down the aisle.

How much is Julia Stiles’ net worth?

Julie Stiles has an estimated net worth of $12 million as per Celebrity Net Worth. In the year 2004, she bought a 3-bedroom apartment in New York City for $1.995 million and sold it after a decade for $2.7 million. She has worked in films like The God Committee, Hustlers, Trouble, The Drowning, Jason Bourne, Blackway, The Great Gilly Hopkins, Out of the Dark, Closed Circuit, Silver Linings Playbook, The One, 10 Things I Hate About You, and more.

Also read Julia Stiles: her pregnancy glow, her hook-up with her fiancé and her life revelations: Read on to know more!

Karlovy Vary International Film Festival Award winner Julia Stiles is an American actress who is active in the entertainment field since 1993. She is best known for her appearance in Rivera, Blue, Dexter, Silver Linings Playbook, State and Main, and Wicked. Read more bio…