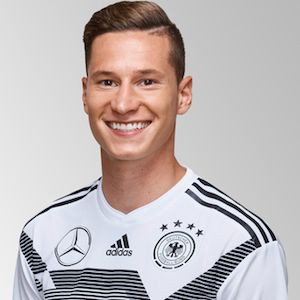 The 2-0 defeat hurt. We see it as our duty to get the rudder back on course, Being World Champions doesn't mean being unbeatable, I didn't play like 20 clubs were ready to pay this sum for me last season. I have to become attractive to big clubs again.

Draxler is engaged to his childhood sweetheart, Lena Stiffel. They attended the same school and met each other in 5th grade. He is enjoying his love life and as well as his football career.

Who is Julian Draxler?

Julian Draxler is a soccer player who plays for the French club Paris Saint-Germain and the German national team. He is known for his ability to use both feet, his speed, and the power of his shot. He is a professional football player.

He used to go to watch Schalke 04’s home matches with his father, Hans-Jürgen Draxler when he was still a child and since then has been a fan of the club. His mother’s name is Monika Draxler. There is no information on his siblings.

Draxler attended the Heisenberg-Gymnasium in Gladbeck before changing to Gesamtschule Berger Feld in 2011.

At the age of 17, Draxler debuted his Bundesliga for Schalke in 2011, and in May of that year scored the first goal as the side and won the DFB-Pokal Final.

In total, he played 171 competitive matches for Schalke, scoring 30 goals, before transferring to VfL Wolfsburg in 2015. In 2017, he joined PSG.

Draxler joined Paris Saint-Germain on a four-year contract in 2016. On 3 January 2017, the deal was finally completed.

He made his competitive debut for PSG in a Coupe de France fixture against Bastia at the Parc des Princes. He scored the final goal of a 7–0 victory in the 89th minute. On February 1, it took him to four goals in five appearances in French football after scoring twice against the same opposition in the Coupe de France.

On 14 February, Draxler scored on his first Champions League appearance for PSG, a 4–0 home win over Barcelona in the round of 16. On 26 February, win against rivals Marseille in Le Classique at the Stade Vélodrome he scored in PSG’s 5–1 after appearing as a substitute. On 1 April, Draxler scored the opening goal in PSG’s 4–1 win over Monaco in the 2017 Coupe de la Ligue final.

Julian Draxler is playing for his country Germany. The Euro cup matches will take place in different countries which are listed below:

He has won numerous awards and honors. In  2011 he was awarded U18 Gold Medal, Fritz Walter Medal. He also grabbed Sportschau Goal of the Year Award in 2013. He was honored Bundesliga Young Player of the Year: 2013–14.

Julian Draxler: Salary and Net Worth

He has a net worth of $3  million. His exact salary figure is not disclosed in any sources.

In 2017 the rumors of him leaving Paris Saint-Germain to join Bayern Munich covered the attention, but later it was dismissed to be false.

After joining Paris Saint Germain from Wolfsburg on a four-year deal, he had upset fans, teammates, and officials at Wolfsburg, with his drive to quit the club lying 13th in the Bundesliga while critics say his performance on the field has fallen short of his stellar reputation.

He had signed a contract for a reported 36 to 40 million euros that will keep him at the top French club until the end of June 2021.

He has dark brown hair and brown eyes. He weighs about 72 Kgs and is about 6 ft tall.

Julian Draxler is active on Instagram with more than 3 million followers and has about 2 million likes in his official Facebook page.