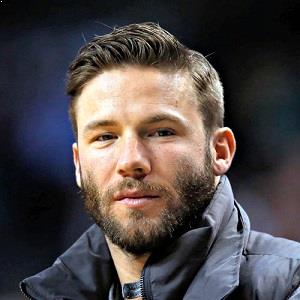 Writing the book was a pretty cool thing to go through, it really made me think of how crazy a journey it really was for this kid from Redwood City, Calif. When I was 12 years old, I was practicing my signature, but did I ever think I'd be a two-time Super Bowl champ, playing on arguably one of the best franchises of all time with the best quarterback of all time, for the best coach of all time?

I mean, I think everyone at this level has a chip on their shoulder. Everyone's got a story. Everyone has had to go through some adversity to get to where they are at so, I guess, we all do.

If you put in the time, you’ll see the rewards.

Julian Edelman dated Swedish Model Ella Rose for a brief amount of time. They have a daughter, Lily, born November 30, 2016. More recently, he was in a relationship with Brazilian Model Adriana Lima from 2016 to 8th March 2017. Currently, he is believed to be single.

Who is Julian Edelman?

Julian Edelman is an American wide receiver for the New England Patriots of the National Football League (NFL). Previously, he played college football at Kent State and the College of San Mateo as a quarterback. He was drafted by the Patriots in the seventh round of the 2009 NFL Draft.

Edelman was born in Redwood City, California on May 22, 1986, to parents Angela (née Gole) and Frank Edelman. Throughout his childhood years, he was raised as a Christian. He became interested in the world of football since his early life.

He is of American nationality. Furthermore, he belongs to a mixed ethnic background of German, 1/8th Ashkenazi Jewish, 1/8th Greek, Irish, English, Scottish, Polish, and Belgian.

Talking about his education, Edelman attended  Woodside High School in Woodside, California. Later, he spent a year at the College of San Mateo before transferring to Kent State University, where he majored in business management.

Edelman threw for 1,312 yards and 14 touchdowns, rushed for a school-record 1,253 yards and 17 touchdowns in his high school. He was not invited to the 2009 NFL Combine. Eventually, the New England Patriots selected him with the 27th pick of the seventh round. Edelman signed a four-year contract with the Patriots that included a $48,700 signing bonus.

He scored his first professional points on August 13, 2009, in a pre-season game against the Philadelphia Eagles. In the 2010 season, he played just 15 games and had four receptions for 14 yards.

During the 2011 season, Edelman was used primarily as a kick and punt returner. Furthermore, he played on 27 of 67 offensive snaps at wide receiver, catching one pass that converted a third down attempt, and 27 of 73 defensive snaps at cornerback in the AFC Conference Championship Game, on January 22, 2012.

More recently, in the 2016 season, in the  Super Bowl LI against the Atlanta Falcons, Edelman made an unusually difficult catch in the fourth quarter. The play sustained a historic comeback for the Patriots, who trailed the Falcons 28–3 late in the third quarter before winning 34–28 in overtime.

On June 8, 2017, Edelman signed a two-year, $11 million contract extension with the Patriots with $9 million guaranteed through the 2019 season. On August 25, 2017, in the team’s third preseason game against the Detroit Lions, he completely tore his ACL, which prematurely ended his 2017 season.

Edelman has a salary of $2,200,000 from New England Patriots. Furthermore, he has an estimated net worth of around $ 8 million.

Edelman became part of a controversy after he was fined $26,309 for a hit on a defenseless player where he hit linebacker Deone Bucannon helmet-to-helmet. Furthermore, his comment about Peyton Manning on the ESPYs also attracted numerous controversies along his way. At present, there are no rumors concerning Edelman and his career.

Talking about his body measurement, Edelman has a height of 1.78 m. Additionally, he weighs around 90 kg. Furthermore, his hair color is light brown and eye color is blue.