Updated On January 19, 2023 | Published By: Neil Richard
Share this
In Relation 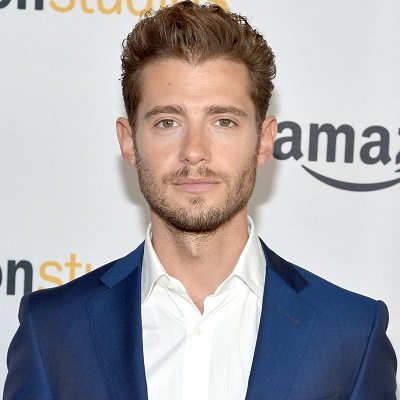 Acting for me is finding those things that, finding the strings of humanity that tie us all together. And you only find that by living life and loving and breaking up.

Educate yourself as much as you can with life. Just go out there.

Is Julian Morris Married? Who is his love?

It was announced on Instagram on December 2, 2021, that he was celebrating his 18th anniversary with his partner.

Right after that it was reported that two had married recently.

Julian Morris is in a relationship with the actress, Sarah Bolger. They started dating in July 2012.

Within no time, the prince and princess got together in real time.

As of now, they are leading happy life with each other.

Who is Julian Morris?

British Julian Morris is an actor and Cinematographer.

He is renowned as Reverend Paul Curtis of Hand of God and Adam Berryman of Man in an Orange Shirt.

Last, in 2020, he appeared in the TV series, The Good Fight as Major Brigham.

Julian was born on the 13th of January 1983 in Crouch End, London to Glen and Andrea Morris.

His birth name is Julian David Morris. He is of Mixed (British, Scottish, and Welsh) ethnicity.

His ancestors were Jewish emigrants. They moved to Africa from Latvia, Russia, Lithuania, and Belarus.

His mother, Andrea was originally from Zimbabwe whereas his father, Glen originally hailed from South Africa.

Hence, he spent a significant portion of his childhood traveling in both countries. He has a younger sister, Amy.

At the age of 13, he attended the Anna Scher Theatre in London.

In the theatre, he was first spotted by the director of the series, The Knock. Through the series, he got the opportunity to enter the entertainment world.

In the series, he portrayed the character of a boy who was pushed into the drug trade at a small age.

– After the series, The Knock, Julian Morris continued his acting training with Anna Scher theater for eight years.

-Within the time interval, he appeared in various TV commercials and series. Also, he joined the Royal Shakespeare Company.

-Along with the company, he worked with directors including Steven Pimlott, Tim Albery, and Elijah Moshinsky.

– In 2005, he made his US Movie debut with the film, Cry Wolf. In the horror movie, he appeared in the character of Owen.

-Before that, he appeared in TV series including Fish, Marple, and Kid in the Corner and the movie, Don’t Go Breaking My Heart as Charlie.

-The movie was also screened at the Sundance Film Festival. For his character, Josh received good reviews from film critics.

– After the movie, he became a significant character in TV series like ER, 24, My Generation, Once Upon a Time, Pretty Little Liars, and Little Women.

-In 2017, he landed the role of the journalist, Bob Woodward in the biographical drama of Mark Felt: The Man Who Brought Down the White House.

– The following year, he appeared in the movie, Viper Club as Andy. Apart from acting, he is also a Cinematographer.

-As a Cinematographer, he has worked in the documentary, Enter the Sinister Set of ‘Cry Wolf’: A Tour with Actor Julian Morris.

To date, he has managed to maintain a distance from any sort of controversy and scandals that created a buzz in the media.

Besides that, there are no rumors related to him.

There are rumors that he will be appearing in the movie, The Giaour as David. Currently, the movie is in the stage of pre-production.

You may also read the bio of Callan Potter, Matt Cornett, and Ron Bottitta.