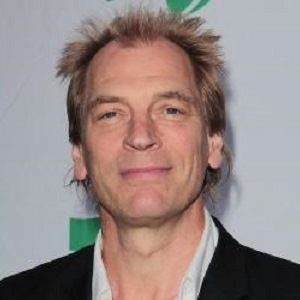 I just love doing broader work - I always get asked to do fairly heavy-duty, intense dramas and interesting, psychologically intense characters. But you know, it's nice to make people laugh sometimes.

Actors have a magic gene within them - I think they're the finest descendants of rogues and vagabonds - and it's all too easily forgotten what the acting legacy is.

Acting has been gentrified. It's become part of the bourgeoisie. But there was a time when it would be a great scandal if you announced you were going to be an actor.

Julian Sands has been married twice in his life. He married journalist Sarah Harvey in 1984. The couple had a son namely, Henry Morley Sands, but the marriage didn’t last long and they got divorced in 1987.

Then, he got married to journalist Evgenia Citkowitz in 1990, the couple has two children namely, Imogen Morley Sands and Natalya Morley Sands.

Who is Julian Sands?

Julian Sands is an actor from England who earned mainstream fame for his role in the miniseries ‘The Sun Also Rises’. Over the course of his three-decade-long career, he has accumulated about 140 film and TV credits. A native of the market town of Otley, Sands began his acting career on stage and was associated with the Forum Theatre Company.

Julian Sands was born in Otley, West Riding of Yorkshire, England on January 4, 1958. His birth name is Julian Richard Morley Sands and he is currently 61 years old. His father’s name is William Sands and his mother’s name is Brenda Sands.

He has a sibling namely, Quentin Sands. Julian holds British citizenship and English ethnicity. His birth sign is Capricorn.

Talking about Julin’s education history, he attended The Royal Central School of Speech and Drama. Then, he attended Lord Wandsworth College.

Talking about his profession, Julian Sands began his film career appearing in supporting roles in films, including Oxford Blues (1984) and The Killing Fields (1984). Likely, he also had a cameo as a Greek soldier in the BBC adaptation of The Box of Delights in 1984. He was also cast as the romantic lead in the 1985 film A Room with a View.

In the year 1985, following the success of A Room with a View and Ken Russell’s Gothic (1986) Sands decided to move to Hollywood and pursue a career in American films. Also, he appeared in several of them—both lower-tier and higher-budget.

He also starred opposite Jackie Chan in the action-comedy film The Medallion (2003). And he also played Lord Olivier in BBC Fours In Praise of Hardcore (2005), a drama about the critic and impresario Kenneth Tynan.

In the year 2001, he starred in Stephen King‘s Rose Red. Sands portrayed Austrian ambassador Klemens von Metternich in the 2002 miniseries Napoléon. During 2006 season of 24, he played terrorist Vladimir Bierko. Sands played Jor-El, Superman’s biological father on Smallville, and reprised the role in the series’ final (tenth) season. In the year 2009, he played Reg Hunt in Bollywood Hero. During 2012, he played Alistair Wesley in the seventh episode of the second season of Person of Interest.

During 2011, he appeared onstage at the Edinburgh Fringe Festival in A Celebration of Harold Pinter, directed by John Malkovich at the Pleasance Courtyard. Additionally, his performance in A Celebration of Harold Pinter was well-received; one theatre, the Irish Repertory Theatre, added an extra three weeks to the show’s run. During 2012, Sands voiced the character of DeFalco in Call of Duty: Black Ops 2.

He was nominated for Best Actor for Warlock (1989) at Chainsaw Award. He won The Maiden and the Princess (2011) at Special Jury Award.

He has an estimated net worth of around $3 million (as per 2019 data) and he has earned that sum of money from his professional career.

Till the date, he has not been the part of controversy and rumor. He is maintaining his personal life properly. He is far from rumors and controversies.

Julian Sands has a height of 5 feet 11 inches. Additionally, his weight is unknown. Julian’s hair color is brown and his eye color is brown.

Also, read the affair, salary, the net worth, controversy, and the bio of Rufus Sewell, Daniel Sharman, Bill Bailey