Julian Schnabel is an American painter and filmmaker. His work as a painter was characterized by its chaotic profusion of styles and sources. He often painted on velvet and applied such materials as broken crockery. As a director, he has won the Cannes Film Festival Award for Best Director and the Golden Globe Award for Best Director. He is married to Swedish interior designer, Louise Kugelberg.

Julian Schnabel is currently married. He is married to Swedish interior designer, Louise Kugelberg. She is also the co-writer and co-editor of Julian’s latest film, At Eternity’s Gate. He has not revealed when they got married as he is private regarding his personal life, This is his third marriage.

His first marriage was with the Belgian clothing designer, Jacqueline Beaurang. They got married in 1980 and have three children: Lola, a painter, and filmmaker, Stella, a poet and actress, Vito, an art dealer.

Following his divorce with her, he got married to the Spanish actress, Olatz Lopez Garmedia with whom he has twin sons, Cy and Olmo. Their marriage and divorce date still remains unknown.

From 2007 to 2011, he dated the Palestinian journalist, Rula Jebreal. After that, he was in a relationship with the Danish model, May Andersen. From their relationship, the couple has a son born in June 2013. However, they separated the following year. 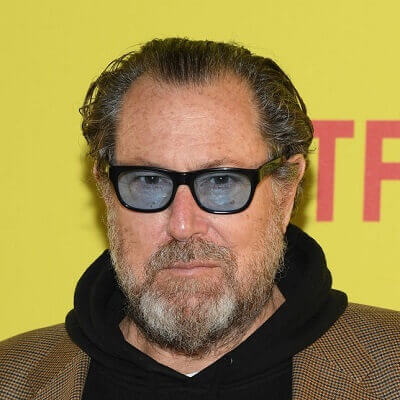 Who is Julian Schnabel?

Julian Schnabel is an American painter and filmmaker. His work as a painter was characterized by its chaotic profusion of styles and sources. He often painted on velvet and applied such materials as broken crockery. As a director, he has won the Cannes Film Festival Award for Best Director and the Golden Globe Award for Best Director.

Julian Schnabel was born in Brooklyn, New York, the USA on October 26, 1951. As of 2020, his age is 68. He was born to parents Esta Greenberg (mother) and Jack Schnabel (father). After spending 14 years in Brooklyn, he and his family moved to Brownsville, Texas in 1965.

His ethnicity is Ashkenazi Jewish.

Talking about his education, he went to the University of Houston from where he received his B.F.A. degree. After graduating, he joined the Whitney Museum of American Art in New York and studied there from 1973-1975.

In 1978, Schnabel made his first plate painting, ‘The Patients and the Doctors’. The next year, his first solo painting exhibition took place at the Mary Boone Gallery in New York City.

Julian Schnabel has had a successful career in filmmaking, too. He started his film journey with the film, Basquiat (1996). This was followed by Before Night Falls (2000). For his work in this movie, he received the Grand Jury Prize at the Venice Film Festival. Similarly, his direction of the 2007 movie, The Diving Bell and the Butterfly (2007) earned him the award for best director at the 2007 Cannes Film Festival and the Golden Globe for best director in addition to a nomination for the Academy Award for Best Director.

In 2010, he directed the film Miral. His latest work is At Eternity’s Gate (2018) starring Willem Dafoe.

Schnabel stands at a height of 5 feet 8 inches. His hair color is brown and similarly, his eyes are also brown in color.

Julian Schnabel has an estimated net worth of around $25 million as of 2020. His successful career as both a painter and a filmmaker has aided to his net worth.

Although Julian has established himself as a well-respected painter and filmmaker, he has been involved in controversy throughout the years.

Back in the 80s when he stormed onto the art scene, he drew criticism for his self-proclaimed importance and the quote,

However, his Palazzo Chupi in the West Village which was styled after a Northern Italian palazzo and painted bright pink was criticized by the Greenwich Village for Historic Preservation as “woefully out of context and a monument to this guy’s ego.”

Moreover, he also came under fire with his 2010 movie, ‘Miral’. It was about a Palestinian girl growing up in the endlessly bloody Arab-Israeli Conflict. The movie was criticized as anti-semitic and pro-Palestinian and even drew protests from the American Jewish Committee and the Anti-Defamation League.

You may also like to read the Bio, Career, Net Worth, Body Measurements, and more about Willem Dafoe, Tony Scott, Emma Stone, and more.