Golden Globe Winner Julianna Margulies is married and mother of one. 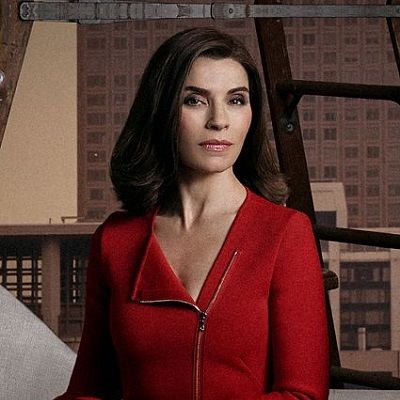 A good wife is someone who thinks she has done everything right: raising the kids, being there for the husband, being home, trying to do it all

If you walk down the street and smile at someone, that will get passed on to the next person. That has the power to change someone's day

The reason I met my husband was because I remembered a friend's birthday. The moral of the story is: Remember people's birthdays

I love being one half of a romantic couple.

Julianna Margulies is a married woman. She is married to Keith Lieberthal since November 10, 2007. They met for dinner according to Julianna. Keith is a lawyer.

By the time they got married, she was seven months pregnant with their child. Currently, they have one son named Kieran. She lives in Manhattan, NY with her small and beautiful family.

Previously, she was in a relationship with Hollywood actor Ron Eldard till 2003.

Who is Julianna Margulies?

Julianna Margulies is an American actress and producer.

After several small TV roles, she achieved worldwide fame for her portrayal of Carol Hathaway on NBC’s long-running medical drama called ‘ER’, for which she bagged an Emmy Award.

Moreover, she also voiced Neera in Dinosaur and has appeared in the miniseries The Mists of Avalon in 2001.

Margulies was born in Spring Valley, New York on June 8, 1966. Her mother’s name is Francesca (née Goldberg, later Gardner) who was a ballet dancer.

And, her father’s name is Paul Margulies. Julianna Margulies was a writer and philosopher. She has two older sisters, Rachel and Alexandra.

Her ethnicity is Ashkenazi Jewish. In addition, she is of American nationality.

Moreover, she graduated with a BA from Sarah Lawrence College, where she had appeared in several campus plays.

Julianna Margulies’s debut came in the movie ‘Out for Justice’. After that, she appeared in two episodes of ‘Homicide: Life on the Street’ in the year 1994. Also, in 1994, she played the role of Nurse Carol Hathaway in the medical drama ‘ER’.

This was her breakthrough role. Her role as Carol was very popular. Following this, she also played in the movies ‘Traveller’, ‘Paradise Road’, ‘A Price Above Rubies, and ‘The Newton Boys. Moreover, she voiced the character Neera in a flick called ‘Dinosaur’ in the year 2000. The following year she featured in the miniseries ‘The Mists of Avalon’ and the television movie ‘Jenifer’.

After that, Julianna also played in the films ‘The Man from Elysian Fields’ and ‘Ghost Ship’. In 2003, Julianna starred in the historical drama titled ‘Hitler: The Rise of Evil’.

The next year, she landed a lead role in the series ‘The Grid’. Moreover, after that, she was featured in the miniseries ‘The Lost Room’ and the movies ‘The Darwin Awards’, ‘Snakes on a Plane’ and ‘Beautiful Ohio’ in the year 2006.

Furthermore, she also starred in the miniseries ‘The Lost Room’. Additionally, in 2008, she portrayed the character of Elizabeth Canterbury in the program ‘Canterbury’s Law’.

In 2009, she started playing the lead role of Alicia Florrick in the series ‘The Good Wife’. Furthermore, in 2017, she starred in the movies ‘The Upside’ and ‘Three Christs’. In addition to this, she also appeared in an episode of ‘Nightcap’ the same year.

After making appearances in some small films, she finally returned to TVi n 2018, portraying the character of a magazine editor in the series Dietland.

However, the show was canceled after just one season. After that, Julianna starred in the miniseries called The Hot Zone in 2019 which was about an ebola crisis in the US in 1989.

Marguiles has won a number of awards and received a lot of nominations. In total, she has bagged 23 awards and a total of 69 nominations for different categories.

In 2010, she won the Golden Globe Award for Best Performance by an Actress in a Television Series. Similarly, she has won three Primetime Emmy Awards. In 1995, she won the award for Outstanding Supporting Actress in a Drama Series for ER.

In 2011 and 2014, she won the Primetime Emmy for Outstanding Lead Actress in a Drama Series for The Good Wife. Additionally, she has also won other awards including the Critics’ Choice TV Award, Gold Derby TV Award, OFTA Television Award among others.

Julianna Margulies has an estimated net worth of around $24 million. She has earned a good sum of money from her acting career.

Furthermore, she has an annual income of around $10 million according to some online sources. Her primary source of income is acting.

There were rumors that she had a feud with her co-star Archie Punjabi. Although they both denied the rumors, the two actresses’ characters were not together in more than 30 episodes.

Also, when they both were finally seen in a scene together, fans found out that they used body doubles and effects to put them together on-screen.

Julianna Margulies has a height of around 5 feet 6 inches. Moreover, she weighs around 61 kg.

You may also like to read Janet Montgomery, Emma Davies, and Erica Rose.