Julianne Hough is an actor, dancer, singer. Also, she is the CEO and Founder of @KINRGY. Julianne is married to Brooks Laich. 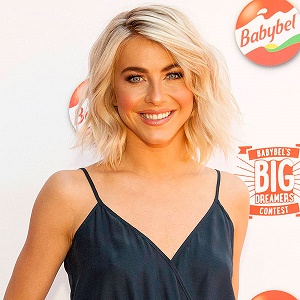 I think it's important to be happy before you can make anybody else happy.

There was a time when my mom would sew costumes for the dance studio so we could keep doing our classes because we couldn't afford them.

Dancing and acting satisfy me in different ways.

After Julianne Hough and her boyfriend, Brooks Laich started dating, it took 2 years for them to announce their engagement in August 2015 but they did not announce any date about their marriage.

They exchanged vows on 8 July 2017. However, this marriage lasted for only three years and now they are separated. As per the sources, Hough is very upset because of the divorce.

She sometimes mentions that even though their marriage can happen anytime, maybe 1 month later or it may take 10 more years, they will have quality time together.

Talking about her past relationships, she was dating Chuck Wicks for nearly one year starting from August 2008 and the breakup inspired her to release a song ‘Is That So Wrong’. Before Julianne fell in deep love with Brooks, she also hooked up with Ryan Seacrest for 3 years (2010-2013).

Who is Julianne Hough?

Julianne Hough is a dancer, singer, and actor who is not only one of the million-dollar dancers of ABC show ‘Show Me the Money’ in 2006 but, also the permanent judge of the show ‘Dancing with the Stars‘ from 2014.

Julianne Hough is the only American to win both Junior World Latin Champion and International Latin Youth Champion.

Julianne was born to Marianne and Bruce Hough who belong to Latter-day Saint family in Orem, Utah, United States of America, and is the youngest of her 4 siblings (Derek Hough, Sharee Hough, Marabeth Hough, and Katherine Hough).

Julianne is not the only child involved in dancing but, her brother Derek Hough is also a professional dancer. Not to talk about other dancers in the Hough family, all the grandparents were dancers.

R5’s members Riker, Rider, Rocky, and Ross Lynch are her cousins making her establish a robust background in dancing and singing as well.

When Julianne’s parents were divorcing, she along with her brother was sent to London for the purpose of learning dance as well as keeping in mind the immense interest in dancing.

She along with her brother and the son of coaches, Mark opened their own group ‘2B1G’ after they joined Italia Conti Academy of Theatre Arts. After returning back to America, She joined Las Vegas Academy and Alta High School.

At fifteen, Julianne Hough won Junior World Latin Champion and International Latin Youth Champion at the ‘Blackpool Dance Festival and wrote her name with golden letters on the list of first American to win both the titles.

The journey from the winner of ‘Dancing With The Stars‘ to the permanent judge of the show was something that made her stand concrete and consistent in her career. She showed the same talent and excellence in season 5 of ‘Dancing with the Stars’ and won the 5th season but, was out of the show in the 4th week of season 6.

Later, In October 2011, she made a come back to the show with the co-star of ‘Footloose’ Kenny Wormald and again in 2013 as a temporary judge. Her involvement in 2012 was for the purpose of promoting her film Rock of Ages.

She has a net worth of $7 million but her salary is not revealed yet.

She always tries to remain untouched by the rumors and controversies that hit the headlines of the news.

However, it doesn’t matter how hard she tries, she is sometimes the part of hot news because of her exceptionally ‘well-dancing’ talent and her recent relation with Brooks.

Julianne Hough has a height of 5 feet 3 inches. Her body weighs 54kg. She has blonde hair and blue eyes. Her body measurements are 34-24-34 inches.