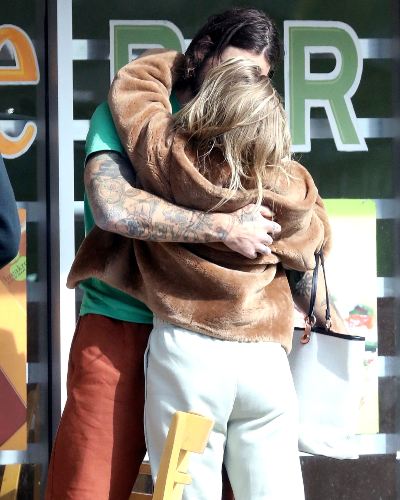 Julianne Hough was spotted kissing model Charlie Wilson in Los Angeles on 19th November 2021. She has moved on from her estranged husband Brooks Laich whom she filed for divorce almost 1.5 years ago.

Hough greeted her potential boyfriend with a big hug and kiss outside a restaurant in Los Angeles on Friday afternoon before heading inside to pick up some food.

Hough was holding three drinks and a big brown bag of food. For her outing, she wore a warm fuzzy brown jacket, a sports bra, gray sweatpants, and a slipper while Charlie sported a casual look in a green T-shirt, baggy rust-colored pants, and white sneakers. More details whether they are dating or not are yet to come out.

What is the age of Julianne Hough?

Hough is 33 years old at present. She was born on 20th July 1988 in Orem, Utah, USA. She is the youngest of five children in a Mormon family. Also, she is the daughter of Marianne and Bruce Hough. Her father was the chairman of the Utah Republican Party twice.

Her siblings are brother Derek Hough and three older sisters Sharee, Marabeth, and Katherine. Dancing was in her family gene as all four grandparents were dancers.

How much is Julianne Hough’s net worth?

Julianne is a dancer, singer, and actor who is not only one of the million-for dancers of ABC show Show Me the Money in 2006 but, also the permanent judge of the show Dancing with the Stars from 2014.

She is the only American to win both Junior World Latin Champion and International Latin Youth Champion. Read more bio…

Jessie J is heartbroken from her miscarriage of first child!
Tags : dancer Singer