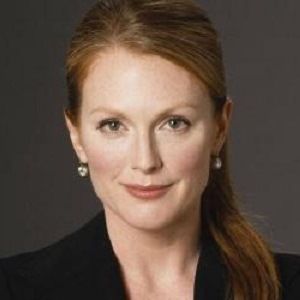 I was one of those kids who played by the rules. I used to have to take people to the principal's office. Isn't that awful?

Only five people got nominated in that category, and that's not very many people. So I did all right

That's the beauty of what actors do, that you only have yourself as a resource. And so the trick is to find something in them that you connect to somewhere. And with every single one of my characters, I have to find something that I really understand and ultimately believe.

Jullianne Moore’s relationship status is truly and happily  married to Bart Freundlich. Bart Freundlich is a film and television director, producer and a screenwriter.

Moore began a relationship with Bart Freundlich, her director on The Myth of Fingerprints, in 1996. They wed in August 2003 and presently live in Greenwich Village, New York City.

Moore has commented, “We have a very solid family life, and it is the most satisfying thing I have ever done.”

Who is Julianne Moore?

Julianne Moore is an American actress and children’s author. In Hollywood movies, Julianne has received many accolades, including an Academy Award and two Golden Globes. Time magazine named Julianne Moore as one of the 100 most influential people in the world in 2015.

Julianne has been prolific in films since the early 1990s, she is well known for her portrayals of emotionally troubled women in both independent and Hollywood films.

Julianne was born in Fort Bragg, North Carolina, the United States on December 3, 1960, to parents Peter Moore Smith and Anne Love Smith. Her father was an American military judge and her mother was a psychologist and a social worker.

In the 1990s, Julianne got her first movie role in the film ‘Tales of the Dark Side’ wherein she played the victim of the mummy. Similarly, she also played a comic role in ‘The Gun in Betty Lou’s Handbag’ in the same year. During 1993, she also appeared in four commercially successful movies.

Her first release that year was ‘Body of Evidence’, a romantic story of ‘Benny & Joon’, followed by a hit crime drama starring Harrison Ford ‘The Fugitive’, and as well as in  Robert Altman’s ‘Short Cuts’, based on the stories of Raymond Carver. During 1994, she also made a distinguished appearance in classic theatrical work ‘Vanya on 42nd Street’.

She also played a woman battling unknown diseases. Whereas, she also played Hugh Grant’s pregnant girlfriend in ‘Nine Month’ in 1995. During 1996, she also played the role of one of the lovers of Picasso in ‘Surviving Picasso’. During 2015, she also appeared as an evil queen in ‘Seventh Son’, a poorly received fantasy–adventure film.

Julianne Moore: Salary and Net Worth

There is no information about her salary. Her net worth is around $ 50 million.