Emmy award holder Julie Banderas is a Fox News reporter. She is married and a proud mommy of three children. After her day's work, she likes to spend time with her family and relax. 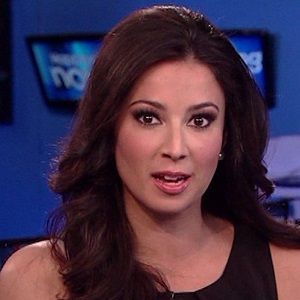 I’m never giving up skiing! I’ll be back out next year but I might want to consider attaching a rear view mirror to my helmet

When you know you’ve been spending so much time at home that going to work confuses the hell out of your 2 year old... thanks mom for babysitting

I wouldn’t call myself super athletic however I am an advanced skier that got plowed into hit by a not so experienced skier. I also have run marathons and would like to run another so I guess I’m somewhat athletic.

Julie Banderas is married to Andrew Sansone, who is the founder of two big media companies named Concrete Media and Big Apple Channel.

Andrew proposed to her when they were holidaying in Long Island Sound.

They have been married since 29 Aug 2009. Their wedding was at the Fifth Presbyterian Church where only close family members and friends were invited.

Who is Julie Banderas?

Julie Banderas is a news anchor and journalist who hails from America.

Banderas gained popularity and fame as an anchor for shows such as America’s News Headquarters and Fox Report Weekend airing on Fox News Channel.

Currently, she is working as a news correspondent and anchor for the Fox News Channel.

Julie Banderas was born in Hartford, Connecticut, the United States on September 25, 1973. She is of American nationality but her ethnicity is Colombian.

Her father is Howard D. Bidwell and her mother is Fabiola R. She spent her childhood along with her sister named Melissa. She does not have any brothers.

Reflecting on her education and qualifications, there is not much insight into her earlier schooling and education.

Later on, she graduated from Emerson College with a bachelor’s degree.

Julie Banderas started her career as a journalist at WLVI-TV in Boston, Massachusetts.

Again, she served as an anchor for WNYW based in New York City.

Subsequently, she started covering the news related to the Republican National Convention. After her exceptional and consistent work in WNYW, she was offered to work for Fox News.

Thus, she was hired by the Fox News Channel to work as a general assignment reporter in 2005.

In the following year, she got international media attention following an infamous on-air clash with a former anchor named Shirley Phelps-Roper.

Later, she worked as the anchor for Fox Report Weekend and left handing over the responsibilities to fellow anchor Harris Faulkner in the year 2010.

Currently, she is an anchor for America’s News Headquarters airing on Saturdays at 1 PM EST as well as Fox Report Weekend at 7 PM EST.

From her successful career, she earned the “Outstanding Single Newscast” Emmy award in the year 2004.

What is the Net Worth of Julie Banderas

She has accumulated a net worth of $12 Million as of 2022. But there is no information regarding her salary.

Seeing her performance in her field we can assume that she earns a good income.

An average salary of a Fox News reporter is estimated to be $73228.

Has she been in any Rumors, Controversy?

Talking about the rumors and controversy, Julie Banderas was caught up in a rumor mill when she was speculated to be fired from the Fox News Channel.

Moreover, her alleged affair with a married photographer got leaked in New York News Daily. However, both of the rumors were not confirmed and has now settled down.

Also, she is known to make her personal comments on sensitive issues wrapping her around controversies many times.

In March 2019, during the live telecast, she was told to cover up her breasts because too much of the cleavage was shown. Julie covered it with grace and reported normally on camera.

Moving towards her body measurements, Julie Banderas has a well-maintained body structure.

She stands at the height of 5 feet and 5 inches and her weight is 60 kg.

Her body figure is 36-24-38 inches. Her bra size is 34B but her shoe size and dress size are not available. She has dark brown eyes and hair color.