Popular for portraying the role of Darla in the American TV series Angel (2000-2004).

Julie Benz is a married woman. She has been married twice till now. Her first husband was John Kassir, an actor. They got married in 1998 and stayed together for nine years.

Although they were married for a long period of time, they didn’t have any children together. They divorced in 2007. After her divorce from her first husband, she stayed single for few years and started dating Rich Orosco, a manager in 2011.

They were very close to each other. After dating each other for a year, they got married on May 5, 2012. They are still together and there is no sign of divorce at all.

She is living a happily married life with her husband. There is no record of her children from previous and present relationships till now. 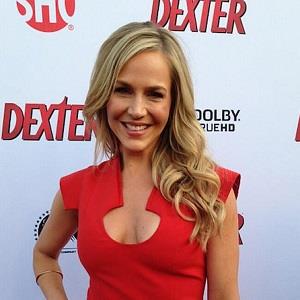 You really have to work hard and apply yourself and by applying yourself and working hard and being diligent, you can achieve success.

To us marriage is first, everything else is second.

I really take pride in the relationship that I have with my husband.

Who is Julie Benz?

Julie Benz was born on May 1, 1972, in Pittsburgh, Pennsylvania, USA. Julie holds an American nationality and she is of German ethnicity.

Her birth name is Julie M. Benz. She was born as the youngest child of George Benz, a surgeon, and Joanne Benz, a figure ice skater. She has an elder sister and a brother named Jeffrey and Jennifer. She grew up in Murrysville with her family.

After high school graduation in 1990, she attended New York University and studied acting for three years, and graduated in 1993.  She started ice skating at the age of three. Benz participated in the 1988 U.S. Championships in junior ice dancing and finished in the 13th position. She had a stress fracture when she was 14, which led her to give up skating. After that, she turned to act and she got involved in a local theater.

Julie began her acting career playing a small role in the play ‘Street Law’. She made her screen acting debut in 1990, with a small speaking role in an episode of the horror movie Two Evil Eyes (1990). The following year, she was cast in the television show Hi Honey, I’m Home! (1991).

She moved to Los Angeles in order to pursue her full-time acting career in 1994. After a few weeks of her move to Los Angeles, she got a small role in an episode of Married… with Children. The next year, appeared as a guest in Crosstown Traffic (1995).

In 1996, she auditioned for the role of Buffy in the television series Buffy the Vampire Slayer (1997) but she didn’t get the role. However, she got a small role as a vampire girl in the series.

She got her big break in 1999, playing a lead role in the American comedy TV series Payne, in which she played FBI agent Kathleen Topolsky.

The following year, she starred in the TV film Satan’s School for Girls (2000).  The same year, she got a lead role in the horror movie Shriek If You Know What I Did Last Friday the Thirteenth (2000).

Julie appeared as Rita Bennett in 49 episodes of Dexter (2006-2010) for which she won several awards including the Saturn Award for Best Supporting Actress on Television.

Since then, she has appeared in several TV series and big-screen movies. She appeared as Jackie in Havenhurst (2014). Recently, she appeared as Holly McCabe in Training Day (2016).

Throughout her long successful acting career, she has accumulated a net worth of 6 million dollars but her salary is not revealed yet.

After her divorce in 2007, Julie was rumored to have hooked up with the famous actor Sylvester Stallone, but she never talked about it. There is no rumor of her being in any extra-marital affairs at the moment

Julie has a height of 5 Feet and 4 Inches. Her body weighs 56kg. She has blonde hair and blue eye. Her body figure measures 24 inches for waist size, 35 inches for hip size, and breast size. Her bra size is 32c.