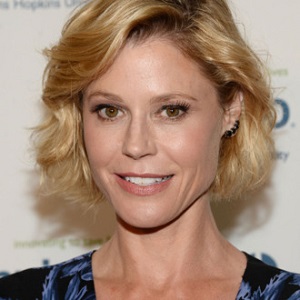 “I'm on a strict gossip diet. No gossip websites, no gossip magazines. Otherwise, I find it paralyzing to exist.”

Previously, she was married to a real estate investor and software developer, Scott Philips, on September 9, 2004. The couple welcomed a son in April 2007 and twin sons in May 2009.

She was visibly pregnant with her twin sons while shooting the pilot for ‘Modern Family’. But, Julie filed for divorce from Philips and it was finalized on September 13, 2018.

Also, she was in a relationship with David Spade from 2002 to 2003. Currently, she has not been linked to any person.

Who is Julie Bowen?

She was born on March 3, 1970, in Baltimore, Maryland, USA. Her birth name is Julie Bowen Luetkemeyer and she is currently 49 years old.

She has got two sisters: Molly(interior designer in L.A.) and Annie(doctor in San Francisco). She was raised in suburban Ruxton-Riderwood, Maryland.

Julie Benz is often mistaken for her and Benz would sign Bowen’s name when she was asked for her autograph.

She practices Yoga to calms her ADHD and she also takes medication for that.

She holds American citizenship and her ethnicity is a mixture of German, Scottish, Irish, Welsh, English, and French.

She attended Calvert School and then Garrison Forest School and Roland Country School. After that, she studied at St. George’s School in Newport, Rhode Island, and majored in Italian Renaissance studies from Brown University.

She performed in ‘Guys and Dolls’, ‘Stage Door’ and ‘Lemon Sky’ during her college and after graduating, she portrayed the leading role in the independent film ‘Five Spot Jewel’. Also, she learned acting at the Actor’s Institute.

She debuted her career in the year 1992 after she made an appearance as Steffy in ‘Loving’. After a year, she appeared as Chris in ‘Lifestories: Families in Crisis’ and Kristie Lewis in ‘Class of ‘96’.

Julie made her breakthrough after she portrayed the role of Carol Vessey in the television series ‘Ed’ from 2000 to 2004. She guest-starred in five episodes of ‘Lost’ as Sarah Shephard from 2005 to 2007. She played attorney Denise Bauer on the series ‘Boston Legal’ from 2005 to 2008 and had a recurring role on ‘Weeds’ in 2008.

Julie was also a spokesmodel for Neutrogena. Her other notable film roles include Amy in ‘Jumping the Broom’ in 2011, Peaches in ‘Knife Fight’ in 2012, Marcie Strong in ‘Life of the Party’ in 2018, etc.

She has an estimated net worth of around $18 million and she has earned that sum of money from her professional career.