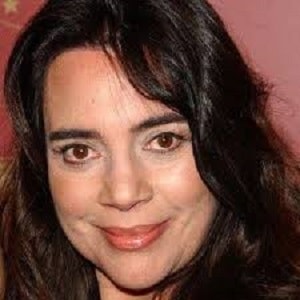 I'd like to believe that following one's bliss is a human right.

What terrifies me? When I read about plots of evil taking over the world and obliterating women's hard-won rights.

As a teen, I had no idea what the self was. Changing skin like a chameleon came naturally to me, but the self felt like a plastic chair in an airport where I'd have to sit and wait for the next radical character to define who I'd be that season. Acting grabbed me by the gut.

What is the relationship of Julie Carmen?

Julie Carmen is a married woman. She is married to Gary Hoffman but their actual date of marriage is not available.

The couple has welcomed two children, one son, and a daughter. They all are spending quality time with each other.

Who is Julie Carmen?

Julie Carmen is an American actress, dancer, and licensed psychotherapist. She became recognized after winning the Venice Film Festival Best Supporting Actress Award in the 1980s for her role in ‘Gloria’.

She was born on April 4, 1954, in New York City, New York, USA. She is currently 66 years old. Julie has not disclosed any information regarding her parents, and siblings.

She was a ballerina for seven years and her acting mentor is Gena Rowlands. Julie holds American citizenship but her ethnicity is unknown.

She achieved a B.S. from the State University of New York and achieved a Master’s degree in Clinical Psychology from Antioch College.

She is also a certified therapist from the International Association of Yoga Therapists and Yoga Alliance at the ERTY-500 level.

Also, she danced in Luis Valdez’s ‘Zoot Suit’ and studied dance at the Merce Cunningham and Erik Hawkins studios. She returned to television in 2015 with the role of Stefie in the independent TV pilot ‘Myrna’. Her recent movies are Windows on the World (2017) and You Can’t Say No (2018).

Recently, she is working as a licensed psychotherapist and she was referenced in Suzanne Somer’s book, ‘Angeles: The Naked Truth About Bioidentical Hormones’ in the chapter named Julie Carmen Yoga.

As sources have estimated, Julie has a net worth of around $9 million as of 2022. She has earned this sum of money from her multiple careers.

The talented actress likes to keep her profile low and she has not been involved in any type of rumors and controversies in her carer.

Julie Carmen has a height of 5 ft. 6 inches with light red eyes and dark brown hair. Other information regarding her weight, body stats, shoe size, dress size, etc. are not available.

To know more about Maia Campbell, Kathleen Beller, and Kimberly Beck, please click on the link.