Julie Chen is a CBS producer, television personality, and news anchor. Julie is married to Leslie Moonves. The couple has one son together. 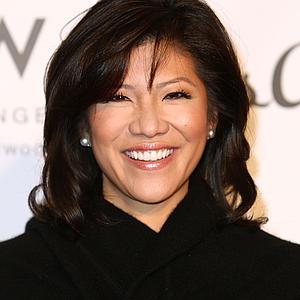 It's a real live Melrose Place. It takes you back to junior high - very catty, very cliquey. You can relate to at least one person in the house, see the cool kids try to bully the misfits and watch the misfits outsmart the bullies. You love to hate certain people

People were writing that I was horrible at the job, and there was all this talk about 'blurring the line' and 'What's happening to journalism'?

As a very spiritual person myself, I was totally curious to meet the guy, and to hear stories of what Les was like as a kid -- and the reunion turned out to be a warm surprise. He turned out to be a very accessible person and a real sports nut like both me and Les. Our apartment has views to the West and so we all shared a beautiful sunset

Then I thought, 'I am the Chen-bot, and I have to embrace my inner Chen-bot.'.

Julie Chen is married to Leslie Moonves. They were in a relationship when Leslie was still married to his former wife Nancy Wiesenfeld.

Nancy and Leslie eventually went on to divorce in 2004.

Chen then married her husband Leslie Moonves on December 23, 2004, in Acapulco, Mexico among a few family and friends.

Together, Chen and Leslie have a son, Charlie Moonves.

Who is Julie Chen?

Julie Chen is an American news anchor. She is a popular television personality, news anchor, and producer for CBS. Chen is also the host of Big Brother and The Talk.

She also appeared as an anchor for The Early Show on CBS.

She has two elder siblings, Gladys and Victoria and they are of Chinese heritage and are fluent in Chinese.

Julie went on to attend Junior High School based in Whitestone, Queens. She eventually joined St. Francis Preparatory School and graduated in 1987.

Julie then went on to join the University of Southern California and graduated in 1991. She went on to major in broadcast journalism and English.

Julie Chen began her career as a news assistant for ABC News in California. Julie Chen went on to work for CBS Morning News. She then became ABC NewsOne as a producer. Julie Chen then worked for WDTN-TV for two years.

Furthermore, Chen started to work as an anchor at Morning News at CBS in 1999. Moreover, she worked alongside Rene Syler, Maggie Rodriguez, Eric Hill, etc. She served as an anchor for CS until 2002.

In addition to this, she started to co-host The Early Show on CBS. Hence she worked on the show until 2010 when it was canceled. She has been hosting Big Brother since the year 2000.

Chen debuts her acting career as a guest appearance in an episode of NCIS: Los Angeles. In the show, she played the part of an Ambassador of the U.S.

She has a net worth of $8 million US.

Julie’s husband Les, who is a CEO has been accused of sexual misconduct.

Lately, Julie Moonves is on Haloween mode as a host on Big Brother. Check this out- Houseguest, Big Brother.