Julie Chrisley is a television reality star who has been featured in Chrisley Knows Best. Julie is married since 1996, and has three children. 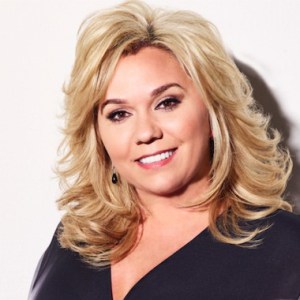 Todd... had two male friends who were battling different cancers, one morning I was getting in the shower, we were in the bathroom and he was like,' You need to have a mammogram

Talking about Julie Chrisley’s personal life, she dated Todd Chrisley dating back to 1995.

After knowing each other long enough, they married on the 25th of May, 1996. Eventually, they were blessed with three children: Savannah, Chase, and Grayson.

Also, she is the stepmother of Kyle and Lindsie, who are born from Todd’s previous marriage to Teresa Terry. Astoundingly, the couple held each other for several years and still seem to be going strong.

Who is Julie Chrisley?

Julie Chrisley is a television reality star who hails from America. She gained a lot of attention for her appearance on the USA Network reality show, Chrisley Knows Best.

Moreover, she is a survivor of breast cancer.

She was the daughter of a Baptist minister and her mother was a former Miss South Carolina. Her childhood was rather a simple one as she grew up in a trailer.

She went through a devastating period when her younger brother decided to take her own life. Moreover, she was leading a simple lifestyle in her childhood days.

In the same way, the way she has displayed her talents and aptitudes, there is no denying that she fought hard to be a capable and strong woman who is now an inspiration for many. It sure did help her to achieve what she always wanted to and dreamed of.

However, there is no information regarding her education and qualifications in detail.

Initiating her career, she revealed that she worked in various places in low-paying jobs before she met her future husband Todd Chrisley. After her marriage, he set up a lot of working opportunities in her career. However, there is no information about where she worked previously.

Afterward, she appeared as a mother of her four children: Savannah, Chase, Kyle, Grayson, and Lindsie on the USA Network reality show, Chrisley Knows Best.

The exceptional personality she carries amassed her a lot of fame and popularity. In the same way, over the years, she has generated a lot of income from appearing in the show which surely has skyrocketed her net worth.

Thus, her net worth is around $3 million with an annual salary of $260,000. Regarding her husband’s net worth, it is calculated at around $45 million.

Recently, one secret came out about her previous marriage before Todd. It had been a top-secret in her life until her previous husband’s sister came out and disclosed who she was married to.

According to her, she was married to her brother, Kenneth Wayne Childress, on March 15, 1991, after they fell in love while studying in high school. Moreover, she also revealed that she was dating Todd while she was married to him. It led to their separation and marriage to Todd.

Moreover, USA Network told that their relationship is not what it looks like as they hardly tolerate each other. However, they are trying hard to maintain an image that they have a so-called ‘Perfect Family’ even if reality is entirely far from perfect.

Julie Chrisley has an average body structure with a decent height of 5 feet 6 inches(1.73m) and a weight of 61 kg matching her body. Precisely, her exact body measurement is 38-28-37 inches. She has dyed blonde hair color and brown eyes color.

What happened between Lindsie and Julie Chrisley?

To whom Julie Chrisley is married?