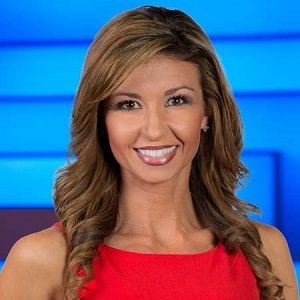 Julie Durda was married to Bryan Francis, Personal Trainer in 2009. But the couple started having differences after a year of their wedding. The couple divorced in 2010.

Then later she had a love affair with David Radliff, who is a TV marketing person. After being in love affairs finally, they decided to marry in 2012. They have a baby named Dillon David who was 6 pounds and 10 ounces at the time of the birth. As per now, the mother and child are doing good. They also have a black Labrador retriever, Stoli.

They both seem good together and are enjoying their love life as per now. There is no sign of getting a divorce.

Who is Julie Durda?

Julie Durda is an American meteorologist and weather anchors. She is also known for her excellent performance as a news reporter and presenter. She started her career via ABC affiliated KXTV as traffic, feature, and weather reporter.

As per her education, she attended Casa Roble High School where she got her high school graduation. She was also a member of the cheerleader team. She then became the member of the San Francisco gold rush cheerleading squad from 2002 till 2004. From an early age, she was featured in different TV shows.

After her high school graduation, she attended Mississippi State University where she selected Science with Broadcast Meteorology and graduated with a degree as a Broadcast Certified Meteorologist. She also applied studied calculus and atmospheric physics. In 2009, she earned her bachelor’s degree.

Julie Durda gave a start to her career from the west coast to east coast. In 2003, she was chosen to be a weather reporter for KXTV. After some time she was interested in meteorology sector.

Then she became an anchor of weather and traffic when she moved to KPHO. She covered the Pacific hurricane seasons, including monsoons.

To uplift her career goals she went to WSVN in Miami, where she was promoted to be South Florida’s #1-morning meteorologist. After working for 6 years in WSVN, she went to WPLG in 2012.

She has been featured on shows like  Good Morning America and ABC’s World News. She has been a part of the American Meteorological Society (AMS).

In 2006, she was able to be a member of the National Weather Association (NWA).

She was a part of CBS Storm Team in Phoenix, and she covered the stories like Pacific hurricane seasons, including monsoons and haboobs, etc.

In 2011, she was voted as the Best Meteorologist in South Florida.

Talking about the rumors and controversy, She was once been in a controversy when she left WSVN and joined the rival WPLG.

Besides this, there are no such rumors regarding her personal life.

Moving towards her body measurements, she has a height of 5 feet 10 inches and weighs 65 kg. Her hair is caramel brown and her eyes are dark brown. Besides this, there is no information about her other body measurements like dress size, shoe size, and body shape.