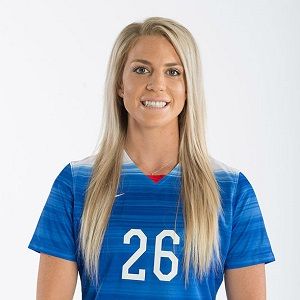 Julie is a married woman. She tied the knot with her love Zach Ertz on March 26, 2017, in Goleta, California. Previously, the couple got engaged at the same baseball stadium where they met on February 26, 2016. Zach Ertz is the National Football League player who plays for the Philadelphia Eagles.

Since their marriage, the married couple has maintained a perfect relationship to date. Apart from him, he has not linked up with any girls. Furthermore, there is not even a single extramarital affair of her. Currently, Julie and Zach are enjoying their married life and living elegantly.

Who is Julie Ertz?

Julie Ertz is an American soccer player who represents the United States women’s national soccer team. Furthermore, she is the 2015 FIFA Women’s World Cup champion. Moreover, she also plays for the Chicago Red Stars of the National Women’s Soccer League as a defensive midfielder and center back.

Julie Ertz was born on April 6, 1992, in Phoenix, Arizona, United States. She grew up in Arizona along with her parents (Kristi and David) and older sister Melanie Johnston. Both of them have played club soccer for Arizona Arsenal Soccer Club.

From the beginning of her childhood, she had a keen interest in soccer and began to play at a very early age. Julie has American nationality.

Moving towards her education, Julie joined Dobson High School from 2006 to 2010. During that time, she volunteered as a student athletic trainer for all four years and also was a member of the National Honor Society. Later, she enrolled at Santa Clara University and completed her graduation in communications.

Julie Ertz began her soccer career from her college level. On January 17, 2014, she signed with the Chicago Red Stars in the first round of the 2014 NWSL College Draft. Later on April 19, 2014, she made her debut in a match against the Western New York Flash and also scored the only goal of the match.

During 2014 season, she played in 21 matches and scored two goals for the club. Moreover, in the 2015 season, she was named to the NWSL Best XI. Furthermore, she has scored the winning goal as an attacking midfielder in a victory over FC Kansas City.

In 2012, Julie earned her U20 call-up and scored a goal against Switzerland at the La Manga Tournament in Spain. In the 2012 FIFA U-20 Women’s World Cup, she appeared in 13 games and smashed four goals. Moreover, she captained her side in the FIFA under-20 world cup and won the Bronze Ball award herself. Julie made her senior team debut on February 9, 2013, against Scotland in the substitute for Becky Sauerbrunn.

In the 2015 FIFA World Cup, she started in each and every match of the tournament and also named in the FIFA Women’s World Cup All-Star Team. Lastly, the United States also won the World Cup.

In 2016, the soccer star was on the 20-player roster for 2016 CONCACAF Women’s Olympic Qualifying tournament. The United States won the tournament after defeating Canada 2–0 on February 21.

Julie Ertz: Net worth and Salary

This amazing player has made a net worth of $1 million. She has earned this amount from her profession only. However, her salary is not yet calculated.

So far, there are not any drastic rumors regarding her personal and professional life. Furthermore, the soccer player has never been the topic of controversy to date. It seems she has full concentration on her work rather than stuck in any controversy.

Julie Ertz has a height of 5 ft 7 inches and weighs 61 kg. Furthermore, she has a gorgeous pair of hazel blue eyes and blonde hair. Besides this, her other body measurements are unknown.