Julie Mehretu is a visual artist who paints abstracted landscapes.

Julie Mehretu is a lesbian. During her high school, she came out to her friends as gay but she didn’t come out to her parents until her college years.

She married Jessica Rankin who is an Australian. She is also a painter. The couple met for the first time in 2000. The pair together also has an apartment in Berlin. 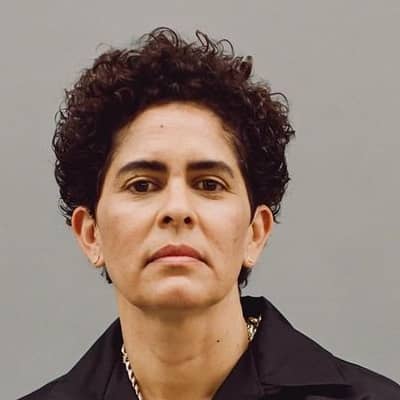 That's what I'm interested in: the space in between, the moment of imagining what is possible and yet not knowing what that is

You're not just this person who's from your own specific experiences, but the collective experience of what makes you who you are because of time

I always wanted to be an artist, but I didn't really know how someone could make a life out it.

Who is Julie Mehretu?

Julie Mehretu is renowned as an American contemporary visual artist. She is best known for her work multi-layered paintings of abstracted landscapes on a large scale.

Lately, she was listed in Time magazine’s 100 most influential people of 2020.

Julie was born in the year 1970 but her birth month and date are still hasn’t disclosed. The birthplace of Mehretu is Addis Ababa, Ethiopia.

She holds an American nationality and belongs to the Ethiopian-American ethnicity.

Mehretu was born to her father named Assefa Mehretua and her mother named Doree Mehretu. Her father is an Ethiopian college professor of geography whereas her mother is an American Montessori teacher.

However, she has never mentioned his siblings in the media. In 1977, she immigrated to East Lansing, Michigan, with her parents to escape political turmoil.

Mehretu studied at East Lansing High School and she then completed her bachelor’s from Kalamazoo College in Kalamazoo, Michigan Arts.

She did a junior year abroad at Cheikh Anta Diop University  (UCAD) in Dakar, Senegal. In 1997, she earned a Master’s degree in Fine Arts from the Rhode Island School of Design in Providence, Rhode Island.

In 2013, her painting, ‘Retopistics: A Renegade Excavation’ commanded $4.6 million at a Christie’s auction, ranking her among the top ten most expensive living female artists.

She might have earned a handsome amount of fortune from her successful career as a painter. But she hasn’t yet revealed her exact net worth, yearly income, and real estate.

Mehretu has a brown pair of eyes and brown hair as well.

Furthermore, her body measurement including her height, weight, and other physics are still under the curtain at the moment.

Julie is active on Instagram with more than 8.1k followers where she has only uploaded one post to date.