Julius Peppers is an American football defensive end for the Carolina Panthers. He is in a relationship. 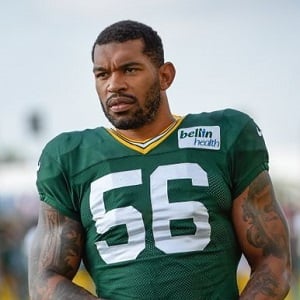 Sometimes you've got to just dig down deep and be accountable for the role that you have on the team.

After considering the ways that I might be able to help young college students, I decided to continue my support of the Light on the Hill scholarship. I would like to endorse this particular fund and encourage other former UNC students who have found success to reach back and assist the efforts of current and future Tar Heels.

Who is Julius Pepper?

Julius Peppers is an American football defensive end for the Carolina Panthers. Previously, he played college football at North Carolina. Panthers drafted him second overall in the 2002 NFL Draft. Additionally, he has also played for the Chicago Bears and the Green Bay Packers.

Peppers was born as Julius Frazier Peppers in Bailey, North Carolina on January 18, 1980. He was born to parents Bessie Brinkley and George Kearney. In addition, he developed a keen interest in the world of football since his childhood years. He is of American nationality. Furthermore, he belongs to the African-American ethnic background.

Peppers finished his high school career with 3,501 rushing yards and 46 touchdowns. For North Carolina Tar Heels football team, he started 33 of the 34 games with 167 tackles, 5 interceptions, and 2 fumble recoveries. Coming to his professional career, Peppers was selected number 2 overall in the 2002 NFL Draft by the Carolina Panthers.

In addition, Peppers was signed by the Chicago Bears on March 5, 2010. He finished the 2010 season with 43 solo tackles, 11 assisted tackles, 2 interceptions, 9 passes defensed, and 8 sacks, 3 forced fumbles. Furthermore, on March 15, 2014, Peppers signed a three-year deal with the Green Bay Packers. He signed a one-year contract to return to the Carolina Panthers on March 10, 2017. More recently, he signed a one-year contract extension on March 14, 2018.

There are several rumors which suggest that Peppers has dated Angela Simmons and Solange Knowles. He also became part of controversies due to his protest against Donald Trump. At present, there are no rumors concerning his life and career.

Talking about his body measurement, Peppers has a height of 6 feet 7 inches (2.01 m). Additionally, he weighs around 134 kg. Furthermore, his hair color is black and his eye color is dark brown.