June Whitfield was a famous English actress who had a lead role in Beggar My Neighbor. She died on 29 December 2018 and is survived by daughter Suzy. 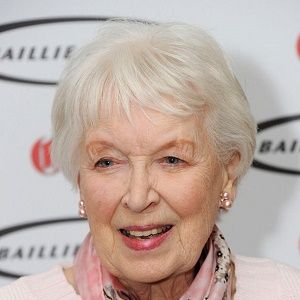 The Carry Ons were a nudging sort of humor, like seaside postcards, not at all politically correct which was always a good thing. They were a sort of innocent kind of humor. I think today's kind of humor is far less innocent and sometimes very vulgar.

In the past few years I've probably worked more than in any of the years since Terry and June finished in 1988 - as Joanna Lumley says, Ab Fab made us born-again actresses.

When you're invited to take such a part, you don't really ask too much you just say 'yes'. [on her role in the drama film The Last of the Blonde Bombshells.]

[on the Carry On Films] "Carry On Abroad was my favorite. I was usually paired with Ken Connor who was a joy to work with."

On talking about her relationship status, in 1955, she married Timothy John Aitchison, who was working as a surveyor. The couple had been blessed with a daughter named Suzy (born 4 June 1960), who has become an actress.

Who is June Whitfield?

June Whitfield was an English actress. She had played the leading role in the television sitcom Beggar My Neighbour which ran for three series.

Besides this, Whitefield’s father was the managing director of a company called Dictograph Telephones that her father started in York’s hire. Both of her parents were amateur actors.

Before being evacuated in World War II to Bognor Regis, Whitfield attended Streatham Hill High School.  Later, she attended St Michael’s School.  Subsequently, she was at Penzance in Cornwall.

She and her parents moved to Huddersfield, where she also learned shorthand and typing.

She graduated from the Royal Academy of Dramatic Art with a diploma in 1944.

Whitfield started her career in radio in the 1940s with Wilfred Pickles and worked on stage in the West End and the regions. she had her first credited television role in The Passing Show, and she joined the London cast of South Pacific in 1951.

In 1953  she replaced the emigrating Joy Nichols on the successful Muir and Norden radio comedy Take It From Here, co-starring Jimmy Edwards and Dick Bentley and in the portion of the show known as “The Glums” she played Eth, fiancée of the dim Ron Glum.

Besides Whitfield had many supporting roles on television, including in Dixon of Dock Green, Arthur’s Treasured Volumes,  The Arthur Askey Show, Faces of Jim, The Benny Hill Show, Steptoe and Son, and Frankie Howard. She played the nurse in the opening scene of  The Blood Donor during the next 15 years.

As well as she appeared in carrying On Nurse, the first of her four appearances in the Carry On film series in 1959.

In 1985 Whitfield was awarded the OBE (Officer of the Order of the British Empire) Queen’s Birthday Honours List for her services to drama.

As she has been maintaining her personal life so well, so she has not been the part of any controversy and rumor.

June Whitfield: Salary and the Net worth

She earns a huge amount of salary but has not disclosed to the media. However, she has an estimated net worth of $12 Million that she earns from her successful profession.

She had an average body type with white hair and dark brown eyes. she was 5 feet 1 inch tall with unknown body mass.

Also, read the salary, career, net worth, controversy, rumors, and the bio of  Jon Dore