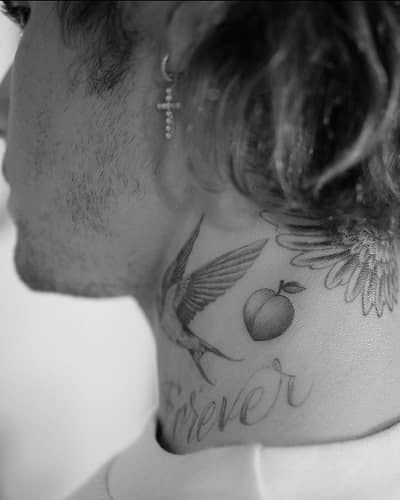 While promoting his album Justice he was confused about whether to get the tattoo or not. He was not sure where he wanted the tattoo to be. He said to a fan who asked him about the tattoo design saying,

When mama Bieber found out her son got himself a new peach tattoo through an Instagram post she wrote,

“Don’t you have enough yet?”

On 29th March 2021, his wife Hailey Bieber showed off her matching peach tattoo. She got the tattoo on her inner forearm and is small in size as compared to her husband. Hailey is a very supportive wife who started ‘Peaches’ makeup trend on TikTok as a tribute to Justin’s new single.

Furthermore, he had won numerous awards throughout his career, including the American Music Award for Artist of the Year in 2010 and 2012, a Grammy Award for Best Dance in the 2016 ceremony, and a Latin Grammy Award for Best Urban Fusion/Performance for the remix of Despacito at the 2017 ceremony. Read more bio…