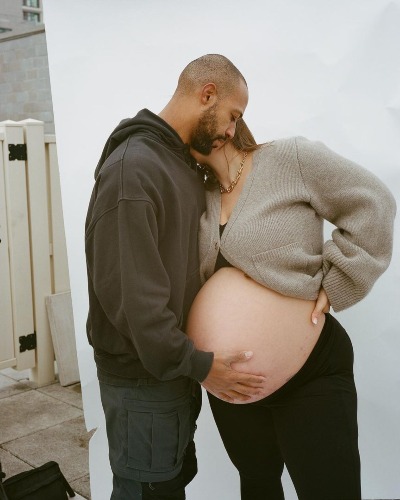 Ashley Graham expecting twin children with her husband Justin Ervin! The coming twin baby is going to be their second and third children together. Graham has been public about her pregnancy as she shared a snap of Justin cradling her bare baby bump. They are all set to become parents again after welcoming their first child Isaac Menelik Giovanni.

As per the gender of the coming baby, they are expecting twin boys and Graham has been posting multiple pregnancy photoshoots on her Instagram account. When Graham showed her stretch marks one of the users commented that the stretch marks could affect her modeling career. She wasted no time and clapped back at the user.

Ashley posted a video of herself modeling with her stretch marks on the display. The comment reads,

“I had twins but I did not get any stretch marks. I hope that does not affect your career.”

“Gosh – hope I still have a career with my stretch marks”

The parents of one announced the pregnancy news in July 2021. She revealed,

“The past year has been full of tiny surprises, big griefs, familiar beginnings and new stories. I’m just beginning to process and celebrate what this next chapter means for us.”

Who is Justin Ervin?

Justin Ervin is a film director and cinematographer who has worked on several projects. His work as Cinematographer includes in Down a Dark Stairwell, Peach Fuzz, The Pain of Love, Elephant in the Room, Derby in Black, and more. Ervin worked as an assistant Paranormal State for the 27 episodes of the TV series. Likewise, he was also the Director and Producer of Six Months Later and Elephant in the Room.

Alicia Witt asked for privacy after the mysterious death of her parents!
Tags : Model Vogue