Updated On January 30, 2023 | Published By: Robert Taylor
Share this
Married 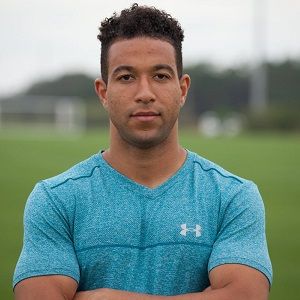 What is the relationship of Justin Morrow?

Justin Morrow is a married man. However, the date of his marriage and the name of his wife is unknown. In addition, they have also welcomed their first child. Apart from his married life, there aren’t any rumors of his external affairs or past relations. It seems like, they are enjoying their company and living happily.

Who is Justin Morrow?

Justin Morrow is a professional soccer player, who represents the United States. Currently, Justin is playing for Toronto FC in Major League Soccer as a Full back. Previously, he has played with Chicago Fire Premier, Cleveland Internationals, and Indiana Invaders.

How old is Justin Morrow?

Justin Morrow was born to Noreen Smyth-Morrow and Leroy Morrow on October 4, 1987, in Cleveland, Ohio, United States. From the beginning of his childhood, he started to play soccer. Justin grew up with his parents in his hometown. His nationality is American and his ethnicity is unknown.

As a youth, he began his professional career with Indiana Invaders and Cleveland Internationals. In 2009, he switched to Chicago Fire Premier, appearing 15 times for the side. His MLS debut came with the San Jose Earthquakes in 2010.

On April 14, 2010, Justin made his professional debut for the side in a U.S. Open Cup.  In the same match, he scored his first goal against Real Salt Lake. Furthermore, he made his first appearance in MLS on May 1, 2010, against the Colorado Rapids. He has lifted the Supporters’ Shield with San Jose Earthquakes in 2012.

As he left San Jose Earthquakes, he signed with Toronto FC in 2014. As of now, he has played three seasons with Toronto FC, appearing in 109 matches. In Toronto FC he is enjoying his game alongside captain Michael Bradley and striker Jozy Altidore.

Concerning his international career, he earned his first cap in January 2013 in a friendly against Canada. In the 2017 CONCACAF Gold Cup, he secured his place. Moreover, his team also won the 2017 Gold Cup.

Justin has received a couple of awards as an individual and with the team. In his presence, Toronto FC won the Canadian Championship for the two consecutive years 2016 and 2017. Recently, he has also lifted the 2017 Gold Cup with the United States. He was also named to the MLS All-Star in 2012.

How much is the net worth of Justin Morrow?

As a professional soccer player, Justin is earning a huge amount of salary from the club and from the various endorsements. In addition, as per the record of 2017, his salary records $210,000. However, he has an estimated net worth of $5 million as of 2023.

As of now, there aren’t any rumors regarding his personal and professional life. Justin Morrow has never been a topic of controversy to date. He has managed to put himself out of any controversy. His dedication to his profession is too high that he didn’t even stick to any problems.

Justin Morrow is 5 ft 9 inches tall and weighs 75 kg. His hair color and eye color are black. Furthermore, there isn’t information about his other body measurements.

Justin Morrow is popular on social media. Because of his excellent style, he has a huge number of followers on Twitter and Instagram. This player has around 5.3k and 4.8k followers respectively.

RIP To These 7 Actors Who Died On Set!