At his age, many of his fans and followers want to know about his life, girlfriend, and relationship status but he has not revealed it yet. He might not be in a relationship because he hasn’t been spotted with any girl. Sylvester revealed through his social media that he is gay.

However, he sometimes shares posts that are related to his relationship status. But, it seems he is just joking about it on his media platforms. He also stated that he would rather date a guy than a girl. If any love he will meet in the near future, hope he will open up and we have something to buzz about. As for now he is single and living his life quite simple and uptight. 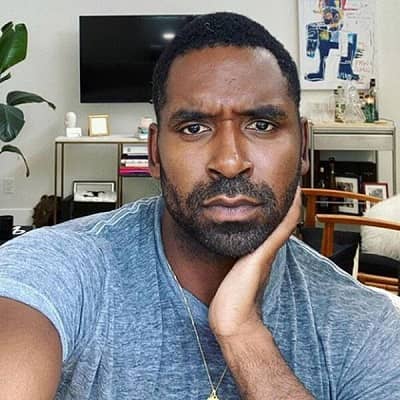 Who is Justin Sylvester?

Justin Sylvester is an American TV star and film actor. He has appeared in various films and television series. Likewise, he is famous as The Ladysitter who is known for his appearance on the 2012 season of Beverly Hills Nannies. Moreover, he is a presenter on E! News Live and a co-host of Daily Pop.

He grew up with his loving father and caring mother in his hometown. Later, he moved to Los Angeles, California. Likewise, he hardly talks about his parents. Maybe, Justin does not want his family to get involved in the media which could lead to unnecessary rumors and controversies. He had a harsh and difficult childhood being a black gay man.

He is of American nationality and his ethnicity is Afro-American. Similarly, his birth sign is Scorpio.

Talking about his education, he graduated from Louisiana State University College. Justin holds the degree in Bachelor of Arts in Mass Communication.

Before he started his career on the television screens, he served in numerous jobs as a personal assistant, stylist, life coach, and consultant. Just after his graduation, Justin made his debut as a host on Actors Entertainment in 2010.

The following year, he appeared in the entertainment industry as a babysitter and assistant to Kyle Richards in the reality show, Real Housewives of Beverly Hills. Eventually, he was cast in the 2012 ABC television series, Beverly Hills Nannies as a babysitter.

Justin is a writer and producer for Warner Bros. he is currently a host on E! Daily Pop, a two-hour show that airs every day. In the show, they discuss the latest news, information, and gossip of pop culture. Likewise, he has hosted and co-hosted various shows and big stages including The Oscar, Today, Growing Up Hip Hop, and Race in America: Our Vote Counts.

Moreover, he is the executive producer of the Tv Series, Broken Record. Justin has portrayed the role of Theophilus Maynes in the 2017 movie Baker Daily: Trump Takedown.

Of all his acting, television appearances, and dedication, why not he has a net worth of around $1M-$5M. Likewise, he is a dedicated and hardworking person who focuses on his professional career.

E! News Daily Pop has been nominated for a 2021 Daytime Emmy Award alongside Access Hollywood, Entertainment Tonight, Extra, and Inside Edition.

There are no rumors and controversies about his personal life or professional life. Likewise, Justin is a dedicated and respected personality who tries to mark his place in the showbiz industry.

Justin stands 5 feet and 11 inches tall and weighs around 70 kg. Similarly, he has a muscular body and is a fitness freak. He has black hair and black color eyes.