Former golfer at the University of Alabama Justin Thomas' girlfriend is Jillian Wisniewski. 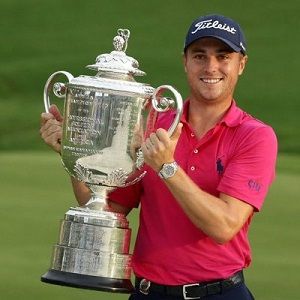 I’m not going to do anything differently. I’m already pretty active on social media, I'm already pretty active in trying to help out other media outlets or other organizations, charities. I’m just trying to play good golf, and the rest will take care of itself. Guys like Tiger Woods and Phil that have pushed the game, got the game of golf where they are, they deserve to be where they’re going to be on that list, anybody I’m not going to pay any attention to it that thinks otherwise, I just highly disagree with it.

What is the relationship of Justin Thomas?

Justin Thomas is in a relationship with Jillian Wisniewski. Their affair was started in the year 2016.

The couple has been spotted several times in public. It seems they are having a good time together and enjoying their company.

Who is Justin Thomas?

Furthermore, his father has been serving as the head professional at the Harmony Landing Country Club in Goshen, Kentucky, since 1990.

From the beginning of his childhood, he was forward on Golf and began to train from an early age.  At the young age of 16 years, Justin became the third youngest to make the cut in a PGA Tour event.

Talking about his education, Justin completed his school at St. Xavier High School in 2011 and later played his college golf at the University of Alabama in Tuscaloosa.

Furthermore, he has won six times for the Crimson Tide and was on the national championship team of 2013.

Justin Thomas began his professional career in 2013 by gaining his tour card on the Web.com Tour. Playing in his first professional event at the 2014 Nationwide Children’s Hospital Championship, Justin won the title.

Furthermore, he finished in fourth place at the Quicken Loans National and Sanderson Farms Championship.

At the PGA Tour’s FedEx Cup, Justin lost to Daniel Berger for the Rookie of the Year award.

In addition, his first win came by thrashing Adam Scott on the PGA Tour by winning the CIMB Classic in Kuala Lumpur, Malaysia. In October 2016, Justin won the title at the CIMB Classic as his second tour victory.

At the Sony Open in Hawaii, Justin turned into the seventh player in PGA Tour history to shoot a 59. Besides, he also became the youngest player to shoot a sub-60 round.

Moreover, in the third round of the 2017 U.S. Open, Justin matched the U.S. Open single-round record of 63.

Finally, he settled in 9th place after competing with Brian Harman in the final grouping. Currently, he is the winner of the 2017 PGA Championship in which he won by two shots.

In the 2017 PGA Championship, Justin became the topic of controversy after Justin’s hole-hanging putt took 10-plus seconds to drop.

However, the rules of golf, state, “When any part of the ball overhangs the lip of the hole, the player is allowed enough time to reach the hole without unreasonable delay and an additional ten seconds to determine whether the ball is at rest.”

Justin Thomas has an athletic height of 5 ft 10 inches and weighs 66 kg.

He has dark brown eyes and light brown hair. Furthermore, there is not any information regarding his other body measurements.

He has a massive fan following on Instagram with over a 1.1million followers. On Twitter, he has more than 374k followers.