American baseball third baseman who is playing for the Los Angeles Dodgers of Major League Baseball(MLB).

Justin Turner is in a relationship. He has a girlfriend named Kourtney Elizabeth. They are in a relationship for a few years. Recently, he proposed to her and she accepted. They got engaged and soon are going to tie the knot.

They keet posting their pictures updates with their relationship status with their fans and followers. 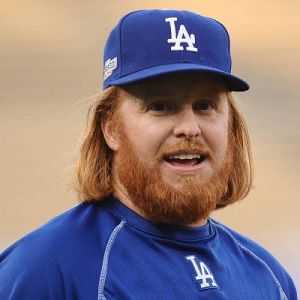 Post-season is definitely a lot more fun. Just to be in the moment and look around and see almost 60,000 people in Dodger Stadium on their feet going crazy, it's pretty special

This place was the most electric I've ever seen it. It should be, (it's) the first World Series here in 29 years

I don't think anybody grows up dreaming to be a utility guy in the big leagues. But I certainly wasn't angry. It just goes to show you how complete of a player he is, and how lucky we are to have him in our lineup. He's been so much fun to hit behind.

Who is Justin Turner?

Justin Turner is an American baseball third baseman who is playing for the Los Angeles Dodgers of Major League Baseball(MLB). Prior, he played for Baltimore Orioles and New York Mets as well.

He was also named College World Series all-tournament team as a shortstop in the year 2003.

Justin was born on 23 November 1984 in Long Beach, California. His nationality is American and his ethnicity is North American.

Talking about Justin’s education, he went to  Mayfair High School in Lakewood, California. For his higher studies, he went to California State University, Fullerton, and specialized in kinesiology. During his school and college days, he was interested in playing baseball.

Justin Turner started his professional career as a baseball player while he was in his college days. He earned the most valuable player honors during his college days. He started playing for the Titans while he was at the California state university. Justin earned All-American honors from Baseball America in the year 2003. Justin was drafted by the Cincinnati Reds in the seventh round of the 2006 Major League Baseball Draft. Justin was promoted to Double-A Chattanooga finishing the 2008 season.

Justin Turner was traded to Baltimore Orioles along with players Ryan Freel and Brandon Waring on December 9, 2008. Justin was assigned to Triple-A Norfolk for the 2009 season. On 8 September 2009 Orioles purchased Justin’s contract. The next day he made his major league debut at Fenway Park. Orioles recalled Turner from Norfolk on April 12, 2010.

Justin Turner was claimed off waivers from Orioles by the New York Mets and optioned to Triple-A Buffalo. Justin Turner was called up to Mets in June 2016. with Nick Evans being sent down to Buffalo. Mets called Turner back
after designating Brad Emaus for assignment on April 19, 2011.

Justin Turner hit his first major league home run against Houston Astros on May 15, 2011. He was named the NL Rookie of the Month for May 2011. He was assigned as an all-around utility infielder in 2012. Turner began platooning at shortstop when shortstop Ruben Tejada went on the disabled list on May 6, 2012. Justin Turner was non-tendered by the Mets after the season 2013. He hit .265 in 301 games with the Mets over four seasons.

Justin Turner had six hits in 15 at-bats in the  2016 National League Division Series. Justin Turner signed a four-year contract valued at $64 million with Dodgers on December 23, 2016. He won All-Star Final Vote on July 6. He was also selected as the co-MVPs of the 2017 National League Championship Series. He batted .333 with 2 home series and 7 RBI on the series.

So far, there are not any drastic rumors regarding his personal and professional life. Moreover, He has never faced any controversy to date. It seems he has more focus on his work rather than on other stuff.

Justin has a height of 5 feet 9 inches and weighs 93 kg. His hair color is blonde and his eye color is brown. His shoe size is unknown.

Which Look Did The Celebs Went For The New Year Eve 2020? Here Are The Pictures!