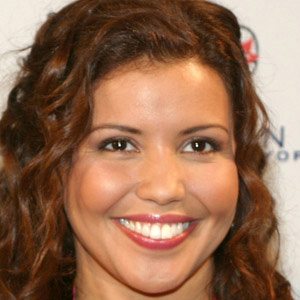 I have actually been very blessed in my career.

I'm a wise Latina woman. Whatever, man. Thank God I'm not in politics, because the fact that you have to explain everything - I'd kill myself. I can't take all those little things they dissect. I'm like, 'Oh my God, get a life.' I don't have time for this.

I'm not one of those actors that knows everything about politics.

What is the relationship of Justina Machado?

Currently, she is single and not dating anyone.

Previously, she was in a serious relationship with Christian Svensson in 2003 and Aaron.

Who is Justina Machado?

Justina Machado is an American actress who is best known for her role as Penelope Alvarez on the Netflix show ‘One Day at a Time’ from 2017 to 2019.

Machado is also widely recognized for her performances as Darci Factor in the CW show ‘Jane the Virgin’, Brenda in the drama ‘Queen of the South’, and Vanessa Diaz in the HBO drama series ‘Six Feet Under.

She was born on the same date as Anika Noni Rose and Idris Elba.

After giving birth to two children, her parents moved to Chicago from Puerto Rico and her parents subsequently divorced.

Her mother remarried and gave birth to three children.

She is the eldest of her four siblings.  Her family was poor and she grew up on the Northwest Side of Chicago and was raised Catholic.

Justina holds American citizenship and her ethnicity is a mix of Puerto Rican and Cuban.

She was interested in drama from an early age and participated in her school plays.

Justina performed with the Latino Chicago Theater Company during her spare time.

After completing her high school education, she made her way to New York City and her previous experience helped her to begin her acting career in New York City.

Justina Machado appeared on the big screen in ‘ABC Afterschool Special’ and made her breakthrough in the television series ‘Six Feet Under’ as Vanessa Diaz in 2005.

Then, she made another notable appearance as Claudia Diaz in nine episodes of the TV series ‘ER’.

Moreover, she appeared as a single mother raising two children and struggling with PTSD after serving in Afghanistan in the remake of ‘One Day at a Time in 2017.

Likewise, her other notable film appearances include ‘She’s So Lovely, ‘Final Destination 2’, ‘Little Fugitive’, ‘The Purge: Anarchy’, and appeared on stage in ‘Some Girl(s)’, ‘In the Heights, Love, Loss and What I Wore’, etc.

Likewise, she made her appearance in the music video for TLC’s song Damages in 2003.

She has been active in the entertainment industry for many years and she has appeared in many films and television shows.

She must have earned a decent amount of money from her career.

There was a rumor that she was dating actor Christian Svensson but the couple never confirmed their relationship.

It seemed that the pair were caught kissing in front of the cameras and paparazzi.

Justina Machado has a height of 5 ft. 1 inch and weighs 54 kg. She has brown eyes and blonde hair.

To know more about Margo Harshman, Rachael Harris, and Tess Harper, please click on the link.

Ashley Laurence
Tags : American Actress Jane the Virgin One Day at a Time