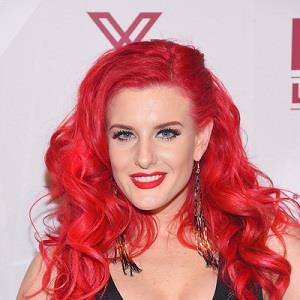 No justice no peace.

Give George Floyd the justice he deserves. Arrest all those responsible and then start to change the broken system. I have always stood with my black sisters &

brothers and I always will.

Strawberry Soda is the best seller so far.

Justina Valentine’s relationship status is currently single. Even if she is dating someone, there is no information about her boyfriend.

She loves bikinis and inking her body.

Who is Justina Valentine?

Some of her singles are ‘Candy Land’, ‘All The Way’ and ‘Unbelievable’. Her album, Feminem was released in 2017.

Justina Valentine was born in Passaic, New Jersey, on February 14, 1987. Her mother’s name is Nancy J. but her father’s name is unknown.

She was interested in music since her childhood years. And since most of her family members are musicians and artists, she participated in theaters and dances from an early age.

Her ethnic background is Caucasian.

Valentine initially started recording her own music in 2006. Additionally, she garnered international acclaim following her 2012 performance at the VANS Warped Tour.

In addition, from 2017 to 2018, Valentine appeared in the TV mini-series ‘The Challenge: Champs vs. Stars’. Additionally, she also portrayed the role of a teacher in the series ‘North Housing Authority’ and played a stripper in ‘Grind: The Robert Wilmot Story’.

As of date, Justina also works on her exclusive streetwear merchandise on the net. This collection features some of her latest t-shirts and apparel.

Valentine was rumored to be bisexual after she was seen kissing the fitness model and Instagram star, Sommer Ray on the sets of MTV ‘Wild n Out.’

Her Tiktok account with justinavalentine username has 6.8 million followers. She also has a Youtube channel, Justina Valentine with over 600k subscribers.