Joseph Simmons is a married man. She is married to Joseph Simmons. Her husband is an American rapper, DJ and TV personality famous as one of the founding members of the influential hip hop group, ‘Run–D.M.C.’ Moreover, he also found a new popularity in 2005 with the MTV reality show, ‘Run’s House’.

The couple first met at a concert on Long Island when she wanted to meet the band members and got attracted by Joseph. Since then, the couple started dating and have been in a long-term relationship. The couple exchanged wedding vows on 25th June 1994.

In 1995, Justine gave birth to the couple’s first child, Daniel Simmons III has followed the footsteps of his father and pursued his career in hip hop. Moreover, she also gave birth to three more children, Russell, Victoria, and Miley Simmons.

Unfortunately, her third child, Victoria died because of omphalocele which is a disease that causes the organs to grow outside of the body. 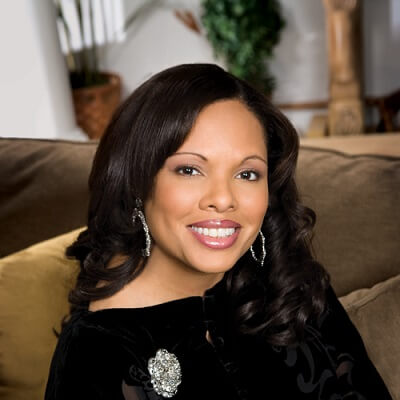 Who is Justine Simmons?

Justine Simmons is an American reality TV star famous for her appearance in ‘All About The Washingtons’, ‘Rev Run’s Renovation’, and ‘Rev Run’s Sunday Suppers’.

Simmons is famous as the wife of the American rapper and TV personality, Joseph Simmons.

Justine Simmons was born on December 11, 1965, in the United States of America under the birth sign, Sagittarius. As of 2021, her age is 55. There is very little information about her family background and early life.

She has not revealed anything about her parents. Similarly, there is no information about her siblings and other family members.

She spent her childhood days in America and her ethnicity is African-American.

Joseph Simmons first made an appearance on television in her husband, Rev Run’s reality TV show, Run’s House in 2005.

Run’s House is an American reality TV series that debuted on October 13, 2005, and chronicles the family life of Joseph Simmons, also known as Rev Run.

The show was filmed in the Simmons family home in Saddle River, New Jersey, and the Simmons offices in Manhattan and the apartment shared by his daughters, Vanessa and Angela, in Los Angeles, California.

The family then appeared on two more reality TV series, ‘Rev Run’s Renovation’ and ‘Rev Run’s Sunday Suppers’. In 2018, she began starring in the Netflix comedy series, ‘All About Washington’s.

She also has a jewelry line, ‘Brown Sugar’. In 2007, she was featured on HSN. Moreover, she has also written a children’s book titled ‘God, Can You Hear Me?’.

Furthermore, she also co-authored the New York Times bestseller, ‘Take Back Your Family’ in 2008 alongside her husband. It became a New York Times Best Seller.

Rev Run is an American rapper, DJ, and TV personality famous as one of the founding members of the influential hip hop group, ‘Run–D.M.C.’ Moreover, he also found a new popularity in 2005 with the MTV reality show, ‘Run’s House’.

Justine has not been involved in any controversies. She has been able to keep herself away from any type of controversy and scandal.

So far, she has not done anything controversial in her career. Similarly, there are no rumors about her of any kind. She has simply focused on her career and personal life.

Simmons has black hair and dark brown eyes. She has not revealed her height and weight. Similarly, there is no information about her body measurements for breasts, waist, and hips.

Simmons is active on social media sites. She has around 4.5k followers.

You may also like to read the Bio, Career, Body Measurements, Net Worth, Social Media, Relationships, and more about Alex Ramos(Instagram Star), Gigi Hadid, Rev Run, and more.