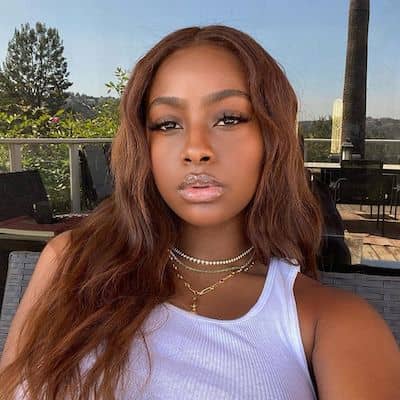 Justine Skye at present is in a romantic relationship. She is dating a guy named Giveon. She and her boyfriend were seen holidaying in Jamaica in 2020.

Who is Justine Skye?

Justine Skye is an American actress, singer, and model. Along with this, she is also a rapper and dancer.

She is an expert in R&B, pop, and hip hop music genres.

She was born Justine Indira Skyers on 24 Aug 1995 in Brooklyn, New York, United States. The name of her father and her mother’s name is Christopher Skyers and Nova Perry respectively.

Her mom is a music attorney and her dad is a merchandiser VP. Justine’s ancestry is Jamaican and is the only child.

Talking about academics, she was homeschooled but took singing lessons.

Justine Skye is now linked with the Nynetineth label. She was previously with Atlantic, Roc Nation, and Mosley Music Group.

Her first album Ultraviolet was released in Jan 2018 and then in June 2020, she came up with Bare With Me. But her first EP was released in Aug 2013 titled Everyday Living.

At present, her net worth is around $2 million which is predicated. However, her salary and other earnings are unknown.

This star singer is keeping herself away from rumors and also not surrounded by any desperate scandals.

However, her affair with WizKid was the headline of the media. It was a short affair but had attracted many eyes. For this Justine says that falling for him was a stupid decision.

Regarding Justine Skye’s body features, her height is 5 ft 7 inches and her body weight is 59 kg. Moreover, her eyes are dark brown and she has black curly hair.

She is also on TikTok with more than 154k fans.