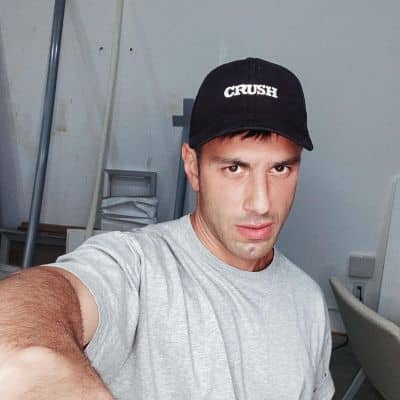 Jwan Yosef has openly stated he is gay. In April 2016, at the time of the amfAR, The Foundation for AIDS Research Gala in Sao Paulo, Brazil, the painter announced his relationship with Puerto Rican singer, Ricky Martin.

The couple first dated in April 2016 after they were spotted looking cozy in Japan. Moreover, they engaged in November 2016 and later tied the knot in 2017. The duo is blessed with two children named Lucia Martin-Yosef and Renn Martin-Yosef in 2018 and 2019 via surrogacy.

Who is Jwan Yosef?

Jwan Yosef is a well-recognized Syrian-born Swedish painter and artist.

Yosef has held solo exhibitions named Painting about Sex, Flesh and violence, lol and High Notes in London and Stockholm, and so on.

Moreover, he became a studio holder as a founding member of The Bomb Factory Art Foundation in Archway, North London.

Jwan Yosef was born on 6 September 1984. At present, he is 37 years young star. Likewise, his birthplace is Ras al-Ayn, Al-Hasakah, Syria.

Jwan is the son of his Kurdish father, Ahmad Yosef whereas his mother is Armenian. Moreover, he has not shared his sibling’s information in the public till now.

Talking about his nationality, Yosef holds a Syrian-Swedish identity whereas his ethnicity is Kurdish-Armenian.

Regarding education, the painter studied painting at Pernby School of Painting in Stockholm between 2004 and 2006. Later, he studied at Konstfack University College of Arts, Crafts and Design, Stockholm.

Yosef has also completed his Masters of Arts from Central Saint Martins in London from 2010 till 2011.

Jwan has worked in different group exhibitions especially in the Konstfack, Stockholm in his early years. Some of his group exhibitions included Life is ElseWhere, London(2011), Some Catch, London(2012), Journey to the Centre of My Mind, Madrid(2013), Faceless, Brussels(2015), Re: Define, Dallas(2015), Till stand, Karlstad(2016).

The painter has a series of four solo exhibitions scheduled for the 2018 fall. He concentrated on three separate figures-actor Rock Hudson, Syrian dictator Hafez al-Assad and his own father, Ahmad Yosef.

A well-known painter, Yosef has earned a handsome amount of money from his profession. He has been active in his profession from the year 2011 till the present.

It is reported that Jwan Yosef has an estimated net worth of $500k-$1 million.

However, the painter has not disclosed his exact salary, earnings, and assets details till now.

Jwan has never been part of any controversial matter or rumors till now. The star has been preoccupied with his professional and private life.

It seems that Yosef prefers enjoying his personal life and does not want to merge it with his professional life.

37 years young painter, Jwan has handsome looks and an admirable personality. He stands at a height of 6 feet. Also, he has a balanced body weight of 80 kg.

Furthermore, Yosef has brown eyes whereas his hair is black.

Nevertheless, the painter has never mentioned other physical details in the public yet.

Regarding his social media presence, Jwan Yosef is an active personality on social media. Jwan has more than 734k followers on his official Instagram account @jwanyosef.

Moreover, Yosef is also available on Facebook with nearly 35k fans and supporters.