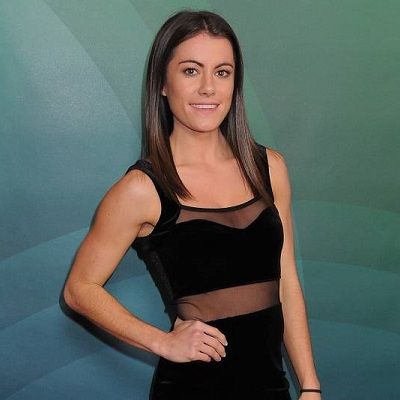 Right now we're on an oatmeal and banana kick. It's superawesome. We mash up the banana on the bottom and put the hot oatmeal on top. Then you mix it up. We don't add any milk or sugar. We use the banana for the flavor. It is just supertasty!

Kacy Catanzaro is currently in a relationship with a wrestler Trevor Mann (Ricochet).

She was prior to Ricochet had been dating Brent Steffensen. He was with Kacy in the American Ninja Warrior show. They were called a royal couple of that show.

Who is Kacy Catanzaro?

Kacy Catanzaro is an American gymnast and a television personality. She is popular as a participant of a show American Ninja Warrior.

Kacy was born as Kacy Esther Catanzaro on Jan 14, 1990, in Glen Ridge, New Jersey, USA. Her mother’s and father’s name is Katherine and Andrew Catanzaro respectively.

As per sibling, she has two sisters Jessica and Cheryl. She is of Italian descent.

Catanzaro attended Towson University, Maryland. There she studied childhood education from 2009 till 2012.

Kacy Catanzaro from the age of 5, got motivated to try gymnasts. She also participated in her college days. In 2012, she was titled as Gymnast of the Year by the Eastern College Athletic Conference.

American Ninja Warrior is an obstacles based reality show broadcast by NBC network. Kacy is best known for her involvement with this show from 2013 to 2017.

From there, she earned the title of the first woman to complete a City Finals course. In American Ninja Warrior season 9, Kacy’s performance led her to the finals but she failed on Stage 1 at the Double Dipper.

After this, she announced her retirement from this show in 2017.

After appearing in a TV reality show, Kacy was called for a tryout with WWE in Jan 2017. Later in August, she was signed by WWE. Her debut match was with Reina González on April 19, 2018, which she lost.

In Jan 2019, she participated in the Royal Rumble. However, her wrestling time was very short. She was last seen NXT debut on March 13, 2019.

As per reports, Kacy was suffering from a back injury in Aug 2019 and in Sep it was reported that she left the WWE. The WWE.com in Oct 2019, has also removed her profile from active competitors.  citing retirement from wrestling.

Kacy did not seem active on the wrestling match. The rumors started to spread about her retirement also. But about this, neither Kacy nor WWE has given any official clarifications.

This wrestler plus TV personality has an estimated net worth of $500 thousand US.

Kacy Catanzaro has brown eyes and long curly light brown hair. Her height is 5 ft and weight is 43 kg with a body figure of 36-25-34 inches.

Kacy Catanzaro’s Instagram has around 429k followers and has posted over 726 posts. Her Facebook page was created on March 22, 2013, and has around 310k followers.

Her Twitter account was created in Dec 2011 and has over 124k followers. In it, she has tweeted for around 6.6k times.