Kader Khan was a married man. He was married to Azra Khan. He had two sons Sarfaraz Khan and Shahnawaz Khan. His son Sarfaraz is an Indian film actor and producer. 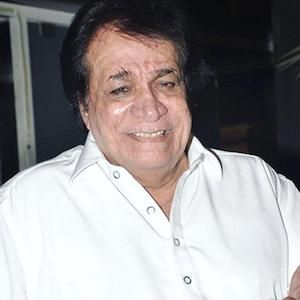 Who is Kader Khan?

Kader Khan was an Indian-Canadian film actor, screenwriter, comedian, and director. He had appeared in more than 300 films. Kader was also famous as a screenwriter for  Bollywood films in the period 1970s to 1999. He had also contributed dialogues for more than 200 films.

Kader Khan who was born in 1937 has died in 1st January 2019. He has died in Canada due to a prolonged illness. He was suffering from supranuclear palsy which is a degenerative disease.

His son Sarfaraz confirmed the news. He was 81 when he died. In 28th December 2018, he was admitted to hospital. The funeral will take place Tuesday in Canada.

His son told that

“My dad has left us. He passed away on December 31 at 6 pm as per Canadian time due to prolonged illness. He slipped into coma in the afternoon. Dad was in the hospital for 16-17 weeks.”

Kader Khan was born on  22 October 1937 in Kabul, Afghanistan. He had Canadian citizenship. His father was Abdul Rahman Khan and his mother was Iqbal Begum. He had three brothers Shams ur Rehman, Fazal Rehman and Habib ur, Rehman. Kader belonged to Pashtun of the Kakar tribe ethnicity. He belonged to Half Indian half Canadian nationality.

For education, he had attended  Ismail Yusuf College. He had a Master’s Diploma in Engineering (MIE) from the Institution of Engineers (India).

Kader Khan gave a start to his career at M. H. Saboo Siddik College of Engineering in Byculla as a teacher in 1970 and 1975.

While he was performing on the Annual Day function of the college he was spotted by Actor Dilip Kumar who signed him for the movie. After he was selected for the movie he was famous and was featured in many movies with Dilip Kumar.

He was featured in many movies as a comedian and also acted on several Bollywood hits. His debut movie was Daag which was released in 1973 with Rajesh Khanna. In the movie, he acted as a prosecuting attorney.

In 2001, he also had his own comedy television series titled Hasna Mat which was featured in Star Plus. In  Sahara One, he had a comedy series called  Hi! Padosi… Kaun Hai Doshi?. In 2015 he did a movie called Tevar and that was his latest movie. So far he had over 300 films in Hindi and Urdu. He had written dialogues for over 250 Indian films.

Talking about the rumors and controversy, he had not been part of any rumors as well as any controversy.

He had a height of 5 feet 8 inches with body weight 92kg. He had dark brown eye color and his hair color was black.