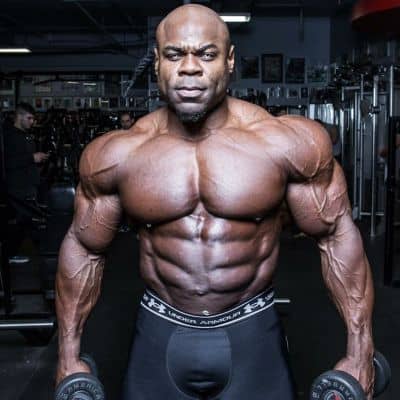 Talking about his love life, Kai Greene is in a relationship with his gym mate, Dayana Cadeau. He met her at the Jan tana Class bodybuilding contest in 1998.

The couple started dating each other in 2007. However, they have not married yet and do not have any children at all. They live happily without any sign of controversy or separation.4

Who is Kai Greene?

Kai Greene is a well-recognized American former professional bodybuilder, personal trainer, artist, and actor. Greene is widely famed as one of the best bodybuilders to have never won the competition.

Not much known about his father and mother’s details, Kai has been secretive towards his parent’s details. Moreover, he has not revealed his sibling’s information in the public yet. He spent his childhood in foster care and a residential treatment center from the age of six.

Talking about his nationality, Greene holds an American identity whereas his ethnicity is African American.

Regarding education, the athlete felt like an outcast and battled to find a place in the community. H  his physical growth and development started from an early stage.

Professionally, Greene started building his body like a bodybuilder when he worked at Johny lats Gym. He participated in the National Physique Committee targeting to move into the IFBB. The bodybuilder won the 1999 NPC Team Universe after he took a five-year break from the competition.

The renowned athlete won the 2016 Arnold Classic. Other than that, he has also worked with director Mike Pulcinella to release Overkill. He also performed in the sequel Redemption. Kai then featured in the 2013 film, Generation Iron, Generation Iron 2, and Generation Iron 3 respectively.

The star has also featured as a male stripper in the 2015 comedy movie, College Debts in the year 2015. Likewise, in 2016, Greene featured in Crazy fist. Next year, he played in the second season of the Netflix series, Stranger Things.

A famed American bodybuilder, Kai has earned a handsome amount of money from his profession.

It is reported that Kai Greene has an estimated net worth of $1 million. The bodybuilder was sponsored by Flex. He released a supplement brand named Dynamik Muscle in 2015.

Also, he is sponsored by sportswear company Ryderwear. Greene signed a deal with sports supplement and clothing company, REDCON1 in 2020.

Kai has never been part of any controversial matter or rumors till now.

It seems that Greece prefers enjoying his personal life and does not want to merge it with his professional life.

45 years old athlete, Kai has a muscular body and a charming personality. He stands at a height of 5 feet 8 inches. Also, he has a balanced bodyweight of 136 kg. His competition weight is 121 kg.

Furthermore, Greene has black eyes whereas his hair is also black His chest size is 58 inches, his thigh is 34 inches, and his arms size is 23 inches.

Regarding his social media presence, Kai Greene is an active personality on social media. Kai has more than 6.6 million followers on his official Instagram account @kaigreene.

He is also active on Twitter with around 312.4k followers.

Moreover, Greene is also available on Facebook with nearly 5.8 million fans and supporters.