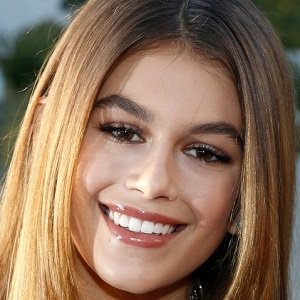 I don't go a day without eating pasta.

My mom is very much about 'less is more.' She showed me how to use makeup to enhance your beauty but not to change your face, which I think is important.

Modeling is really what I do during my free time. It's fun for me, so it doesn't feel like work. I choose to do it.

Kaia Gerber is currently in a relationship. She is dating a guy named Jacob Elordi. Recently, this couple was seen having lunch together.

Also, she was linked with the fashion model, Jordan Barrett after they took a picture after attending the CR Fashion Book Party in Paris and also shared a friendly hug while leaving the party venue.

Who is Kaia Gerber?

She was born on September 3, 2001, in Los Angeles, California, USA. Her birth name is Kaia Jordan Gerber and she is currently 19 years old. Her father’s name is Rande Gerber and her mother’s name is Cindy Crawford.

Kaia’s father is a model-turned-businessman whereas her mother is also a supermodel. Her mother belongs to German, English, French, and Danish descent and her father is Jewish.

She has an older brother named Presley Gerber. She loves playing guitar and has several pet animals: dog, piglets, lizards, and turtles.

Talking about her education history, she took online classes at Malibu High School.

Kaia Gerber appeared in Versace’s junior line, ‘Young Versace’ at the age of 10. After that, she was featured in magazines like Teen Vogue, Vogue, and Pop Magazine.

She signed a famous modeling agency called IMG Models at the age of 13 and also walked in the ramp for numerous fashion houses such as Fendi, Coach, Alexander Wang, Marc Jacobs, etc. Also, she landed her first solo cover shoot for LOVE magazine in the same year.

She debuted her big screen from the film ‘Sister Cities’ in 2016 in which she portrayed the role of young Carolina. Furthermore, her television gigs include ‘Access Hollywood’ and ‘Entertainment Tonight’.

Likewise, she made her runway debut in 2017 for Raf Simon’s Calvin Klein Collection and also walked the ramp for Versace during 2018 Springs Fashion Week along with her mother.

She clicked her first solo cover or Vogue Paris in 2018 and walked at the Versace Milan Fashion Week along with Gigi Hadid in February.

She won Model of the Year at The Fashion Awards 2018. Apart from that, she has not won any other awards and nominations.

She must have earned a huge sum of money from her career however, she has not revealed her exact net worth, salary, and income.

Her father’s and mother’s combined net worth is around $200 million according to the sources.

To know more about Lori Loughlin, Erica Christensen, and Victoria Dillard, please click on the link.