Posted by MarriedBiography Posted on August 17, 2020 | In Affair , Dating , Net Worth
Share this 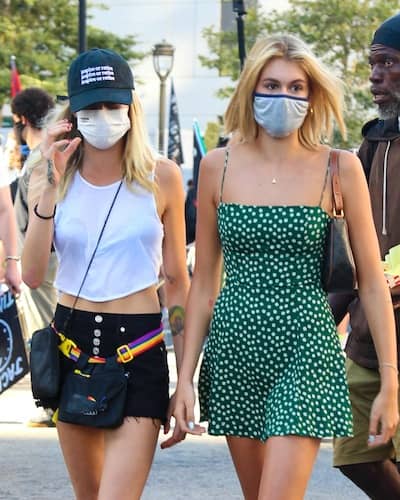 Model Cara Delevingne celebrated her birthday with actress Kaia Gerber months after breaking up with Ashley Benson. Kaia and Cara have matching tattoos which she showed on 12th August 2020 while wishing Delevingne on her birthday. She posted a picture of them showing off their similar ink on Instagram stories. The picture consists of their feet.

“Happy birthday to my solemate,”

It seems like they are heading somewhere as the two were spotted together marching at the Black Lives Matter protest in July 2020.

“The only person who wears my face on a sweatshirt,”

It showed Cara rocking a white hoodie that had the Kaia’s face and name printed in the front. For her birthday, she Delevingne asked followers to sign a petition in favor of the Break Free From Pollution Act.

“For my birthday this year, join me in demanding Congress pass the Break Free From Pollution Act and put our planet and public health above corporate profit. can we get 28,000 signatures for my 28th birthday?”

Cara Delevingne started dating actress Ashley Benson in 2018. It started after they appeared in the Punk-rock drama Her Smell. On 3rd May 2018, Ashley posted her first Instagram picture with Cara.

They were photographed holding hands in late that month. There was a photo of them hugging and kissing on neck.

Again on 14th August 2019, they were spotted kissing at Heathrow Airport shortly after they arrived there together. On Cara’s 26th birthday, Benson was also a guest.

Benson said in an interview,

“I think it’s the best way in any relationship. I’ve always been very private about them and I think it’s just better … I just kinda try to keep myself as private as possible.”

But finally in June 2019, Cara made their relationship public. The pair moved in together in Los Angeles, California. Together, they attended Zoe Kravitz and Karl Glusman‘s rhearsal dinner and wedding in Paris. Their relationship was public as they shared each other’s pictures on Instagram.

Everything was going well until their breakup rumors started surfacing. They two actually broke up and are not together any more.

How much is Cara Delevingne’s net worth?

The estimated net worth of model Cara Delevingne is $28 million. She started modeling at the age of ten in an editorial shot by Bruce Weber for Vogue Italia alongside model Lady Eloise Anson. She has worked with various fashion designers and houses, including H&M, Zara, Chanel, and Burberry. Cara was one of the highest-paid models in the world and earns an estimated $9 million a year.

She and her sister Poppy Delevingne has a house in Hollywood Hills. Similarly, Kaia has a net worth of $3 million.

Also read Hayden Panettiere moving on from her domestic voilence past! Know about her relationship with Brian Hickerson, Wladimir Klitschko, daughter, net worth, biography

Jessica White splits from boyfriend Nick Cannon! Has he cheated on her?
Tags : Actress Model