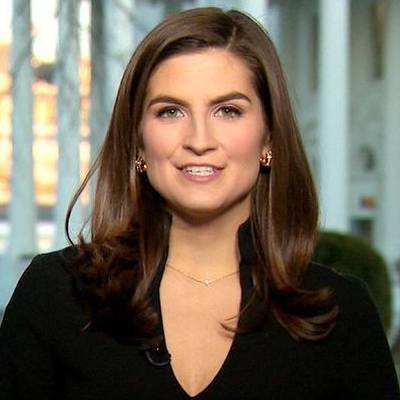 It is surprised to know that the brave journalist, Kaitlan Collins is still not married and does not have any children at all.

But she is in a romantic relationship with Will Douglas. Will is the owner of Crimson Care Pharmacy Group that is situated in Sulpher Springs, Texas. Collins had posted pictures of the couple on Instagram.

As per sources, the pair went on a holiday at Cancun, Quintana Roo alongside their close mates in 2016.

Moreover, they were seen roaming in National Park in Ballpark, Washington, D.C. Meanwhile, the couple was noticed together watching a baseball match in Washington.

Who is Kaitlan Collins?

Kaitlan Collins is a well-famed American journalist and head White House Correspondent for CNN. Collins was ranked as one of the 50 most influential people by Mediaite in news media in 2018 as well as one of Forbes’ 30 under 30 in 2019.

Also, she served as the White House reporter for the website, The Daily Caller.

Kaitlan Collins was born on 7 April 1992. As of now, she is 28 years old. Likewise, her birthplace is Prattville, Alabama, the USA.

Kaitlan is the daughter of her father, Jeff Collins whereas her mother’s details is still unknown. Likewise, she has two brothers, Brayden Collins and Cole Collings, and a sister, Lena Grace. Professionally, her father is a senior mortgage banker.

Talking about her nationality, Kaitlan holds an American identity whereas her ethnicity is Caucasian. Also, she follows the Christianity religion.

The fearless reporter, Collins took her graduation degree from Prattville High School. Additionally, she studied at the University of Alabama and received her Bachelor of Arts degree in political science and journalism in May 2014. Kaitlan was also an associate of the Alpha Phi sorority.

After completion of her education, Kaitlan began working as a freelance blogger and writer. She worked for different journals and newspapers. The news website, The Daily Caller hired her because of her writing skills for the post of entertainment reporter in June 2014.

After joining the news website, she covered the 2016 presidential campaign and influenced many. As a result, Collins was advanced as the White House reporter for the Tucker Carlson- owned site in 2017. Nevertheless, the reporter did not go further for her job.

On the other hand, Collins has worked on various television and web shows alongside Ticker Carlson, Ben Shapiro, Brian Williams, Kate Bolduan, Jake Tapper, and Erin Burnett as well.

Furthermore, Collins was recognized as Mediaite’s number 50 Most Influential person in News Media. Also, she has been famed as Crain’s NewsPro’s 12 to Watch in TV News in January 2019.

Famed reporter, Collins has earned handsome money working as a journalist. She has been in her profession from 2014 till now.

Kaitlan’s main source of income is from journalism. It is believed that she earns an average of $100k monthly from her profession.

Also, it is reported that she has an estimated net worth of $1.5 million presently.

Nevertheless, Kaitlan has kept her exact earnings, salary, and assets details till now.

The popular reporter, Kaitlan has been a controversial matter after posting some tweets back in 2011. At the time of college on 20 July 2011, she published a disrespectful tweet using the word ‘Fag’.

Moreover, she also stated that she would not share a room with Lesbian at all. However, Collins made an apology for such displeasing language.

Additionally, she got ban from the White House Press Conference in July 2018. It was because of her unsuitable interview with President, Donald Trump. The officials alleged that she yelled and denied leaving the premises after the incident.

On the other side, Kaitlan received support from CNN as they mentioned the ban was not compulsion and also added it was improper, weak, and irrational.

The brave journalist, Kaitlan Collins has gorgeous looks and a charming appearance. Collins stands at a pretty height of 5 feet and 6 inches. Also, she has a balanced bodyweight of 58 kg.

Furthermore, Kaitlan has blue eyes whereas her hair is brown.

About her social media presence, Kaitlan Collins is an active personality on social media. Kaitlan has more than 199k followers on her official Instagram account @kaitlancollins.

She is active on Twitter as well with more than 1.1 million followers.

Nevertheless, Collins is not active on Facebook till now.