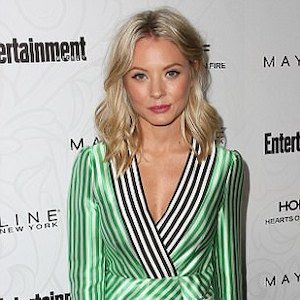 “Actors in general have some place in them that can be sensitive and easily damaged: not damaged in a bad way, but insecurity, because that's what it breeds, especially in females and female-lead types.”

Kaitlin Doubleday is a married woman. She has been married to her long term boyfriend Devin Lucien since May 6, 2016. The duo got married in an outdoor ceremony in Big Sur, California. They got engaged in May 2015 in Paris after a long and stable affair. The couple has welcomed a son named Franklin Lucien in February 2019. The family seems to be living happily and there is no sign of divorce between them.

Who is Kaitlin Doubleday?

Kaitlin Doubleday is an American actress who is best known for ‘Catch Me If You Can’ in 2002, ‘Waiting…’ in 2005 and ‘Empire’ in 2015. She played the character Jessie Caine in the CMT musical drama series ‘Nashville’ playing Jessie Caine.

She was born on July 19, 1984, in Los Angeles, California, USA. Her birth name is Kaitlin Jenette Doubleday and she is currently 34 years old. Her mother’s name is Christina Hart(actress) and her father’s name is Frank Doubleday(actor). She has a sister named Portia Doubleday(actress).

Also, her mother, Portia is active in the entertainment industry as a playwright and as a producer in the theatre. Her all family members(father, mother, and sister) are the members of the Screen Actors Guild.

Kaitlin holds American citizenship and her ethnicity is mixed(German and English).

Talking about her education history, she attended Hamilton High School in Los Angeles.

Kaitlin debuted her acting career from the episode of the CBS procedural ‘Without a Trace’ in 2002. She portrayed the character Joanna in the feature film ‘Catch Me If You Can’ in the same year. Then, She appeared in the supporting roles in the films ‘Waiting…’ in 2006, ‘The TV Set’ in 2006, and ‘Accepted’ in 2006. After a year, she appeared in the series ‘Cavemen’ but the series was canceled after receiving negative reviews.

In addition, she portrayed the character Rhonda Lyon, wife of the eldest son in the Lyon family in the Fox musical prime time soap opera, ‘Empire’ in 2015. Also, she was cast in the independent drama film ‘Po’ directed by John Asher.

She was nominated for Teen Choice Award in the category Choice TV: Chemistry for ‘Empire’ in 2015.

She has an estimated net worth of around $1.5 million and she has earned that sum of money from her career. However, her salary and income are under review.

There was a rumor that she was in a relationship with a mysterious guy with whom she was seen holding the hands within the public places but later she declared that he was only a good friend of her.