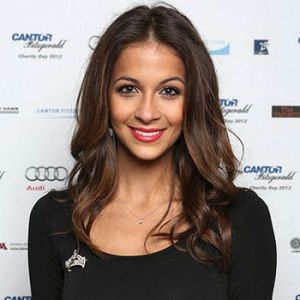 Kaitlin Monte is a married woman. She exchanged vows with Chris Fohlin. They were in relationships for many years. They got engaged in 2015 and married on 11 June 2016.

They started to date each other in 2002.

Their first daughter, Avalin was born in April 2017. Then in Dec 2018, this couple was blessed with another child. They named their son Christopher.

There is no record of her previous relationships. The couple looks good together and it seems they are made for each other.

Who is Kaitlin Monte?

Kaitlin Monte is an American journalist who is working for Fox-owned KRIV. She is also known for being an anchor of the station’s weeknight newscast and she is also the solo anchor of The News Edge.

Talking about her early life she was born in 1989, February 7. She experienced her childhood in Pittsford, New York. She belongs to American nationality and her ethnicity is Caucasian.

Details about her father, mother, and siblings are hidden.

As per her education, she attended Pittsford Mendon High School. Then she went to attended Clarkson University’s Clarkson School.

Kaitlin graduated from the University of Tampa at the age of 19.

In 2009, for the USO (United Services Organization) Show Troupe, she became a performer.

In television, Kaitlin Monte gave a start to her career in 2012 as the interactive trivia host on the show called Today in New York. In 2013 and 2014 Mets seasons she was the host of the Mets Insider on SportsNet New York.

Then in 2004, she was announced for the show PIX Morning News as the new weekday morning traffic reporter. From 5 am till 9 am she reported for the traffic conditions.

In 2012, she joined NBC where she worked as a trivia host, and also in the same year for two seasons she joined Sports Net New York as a host.

After her hard work was shown, she was nominated for the 2015 Emmy Award for On-Camera Talent for Transportation and traffic. In the show Celebrity Tastemakers, Monte hosted a cocktail segment called ‘The sip’.

In 2016, she joined KRIV which was a station owned by Fox. She was also selected as a fill-in anchor in July 2016.

In the station’s weekday evening news program she became a co-anchor on Fox 26 News. In ‘The News Edge‘, she worked as a solo anchor.

She was also honored by many awards for lifestyle & fitness scholarships. As her personal platform, she used ‘Anti-Bullying through Leadership’.

She was one of the beautiful contestants of the show where she won the audience’s heart.

This reporter’s net worth is estimated at around $2 million. Moreover, her salary as a journalist is around $38k per year.

Talking about the rumors and controversy of this talented actress Kaitlin Monte, “Currently, there are no rumors regarding her personal and professional life.

Kaitlin Monte has a height of 5 Feet 6 inch but her body weight is unknown. She has brown hair color and her eyes are light brown.

Besides this, there is no information about her body shape and also her other body measurements.

Kaitlin is active in many sorts of social media. She also has her own website.